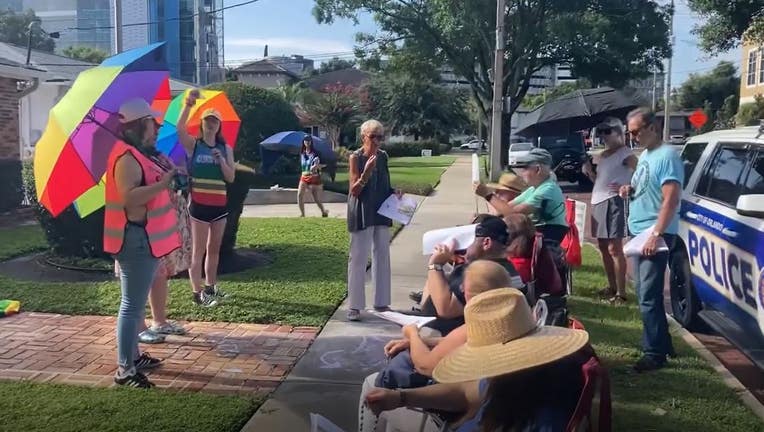 ORLANDO, Fla. - Following a recent City of Orlando employee suspension who was seen blocking the entrance to a women’s clinic, volunteers are stepping up to help escort women safely into the facility.
An Orlando area mom, Emily, posted on the social media site, Nextdoor to see if there was anyone else interested in helping escort women to the clinics. Emily told FOX 35 that it didn’t take long for her inbox to get filled with people wanting to help.

"I had so many people reaching out, probably at least 25 different people reaching out asking if they could help," Emily said.
Emily said what sparked her interest to post was one recent Saturday. She said the group of volunteers was able to outnumber people who were protesting the clinics. She went on to say by doing so, the protesters left early, which allowed women seeking care to get inside.

"I realized there is power in numbers, and we need people like this all the time. We need these many people every day during the week," she said.
The social media post interested another Orlando area mom, Kathy Miller to reach out.

"I got up this morning, picked up my phone, and went to next door app for my neighborhood," Miller said. "That post just appeared, it was almost like it was a calling. It was so genuine, I was like ‘oh my gosh yes,’ she said.

Both Emily and Kathy say it’s scenarios like the one reported with the city of Orlando employee that makes them want to step in.

"I think back to my daughter, like if she was in trouble, what would I do? How would I help her? I think a lot of people forget about that," Miller said.

"There are people out there that will help you and even if you don’t see them in front of your clinic look online because I promise you, you might have a next-door neighbor who will go with you and protect you, so you don’t feel alone," Emily said.

The group helps at the Downtown Orlando location and Altamonte Springs. If interested, you can email clinicdefender22@gmail.com