Security guard shot point blank in the back

Atlanta police are searching for the gunman who walked up behind a security guard at a southwest Atlanta business and shot him a point blank range.

ATLANTA - A gunman walked up behind an unsuspecting security guard and pulled the trigger outside a southwest Atlanta restaurant on Monday evening, investigators said.

Surveillance video released Tuesday shows the moments leading up to the shooting as well as several key witnesses, who investigators said they would like to speak with about the homicide.

Just minutes before 7 p.m. on Monday, a high-resolution surveillance camera clearly captured 51-year-old security guard Anthony Frazier getting out of a black GMC parked along the side of the American Wings and Seafood restaurant in a strip mall located at 387 Cleveland Ave SW. He was briefly distracted as he got out of the SUV and headed towards the front of the store wearing his black "Enforcement" shirt.

The Atlanta Police Department released this video showing a gunman approach a security guard from behind just before pulling the trigger. In addition to the gunman, investigators were like to speak with four others who may have witnessed it.

Frazier might not have noticed the man who came around the corner from behind the business and quickly approached him from behind. That man was dressed in a black, long-sleeve T-shirt with graphics on it, a black ball cap with a Nike logo. He was carrying a camouflage backpack. As the unidentified man approached Fraizer, he can be seen pulling a handgun from his right pocket. 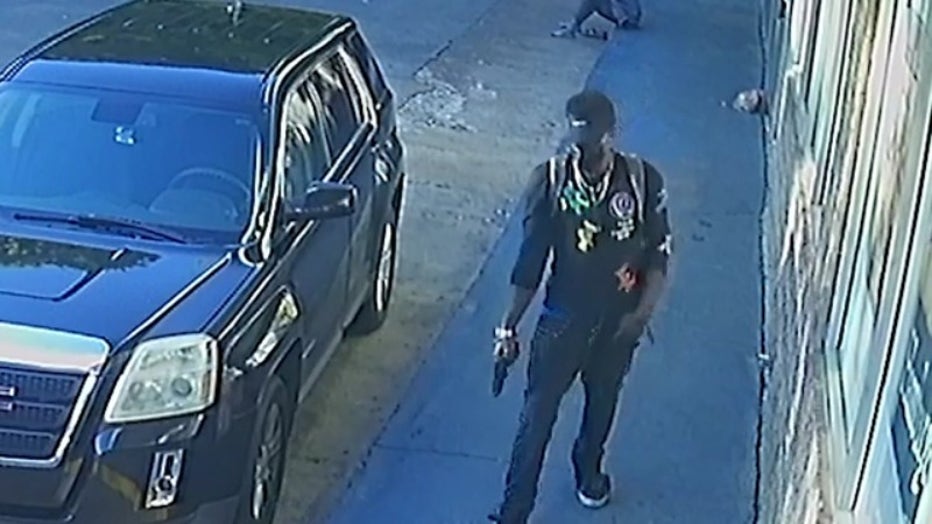 In fewer than 10 seconds after Fraizer shut the door to his SUV, he was shot point-blank from behind. The video released by police omits the actual shooting, but shows the gunman scavenging around after, seemingly taking something from Fraizer as he lies motionless on the sidewalk. 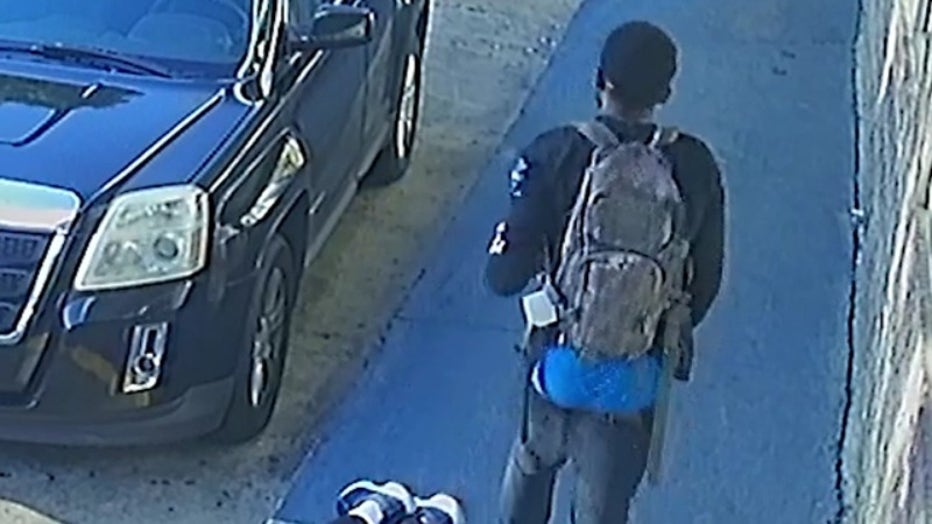 The gunman then turns around and started to walk towards the woods behind the business. As he walks away from the scene, he turns to an older man who was sitting on the sidewalk some 35 feet away, who was watching the whole thing unfold, completely unmoved by the violence. As the gunman passes, the older man puts up both his hands up towards him. The gunman then dropped something, picked it up, and left the scene.

That older man then walks past the SUV and Fraizer, shaking his head and looking at him without stopping to check on him. That man appears to have a white beard, and was dressed in a blue button-down shirt possibly with another shirt over it, jeans, and a backward blue cap. Investigators said they want to talk to that man. 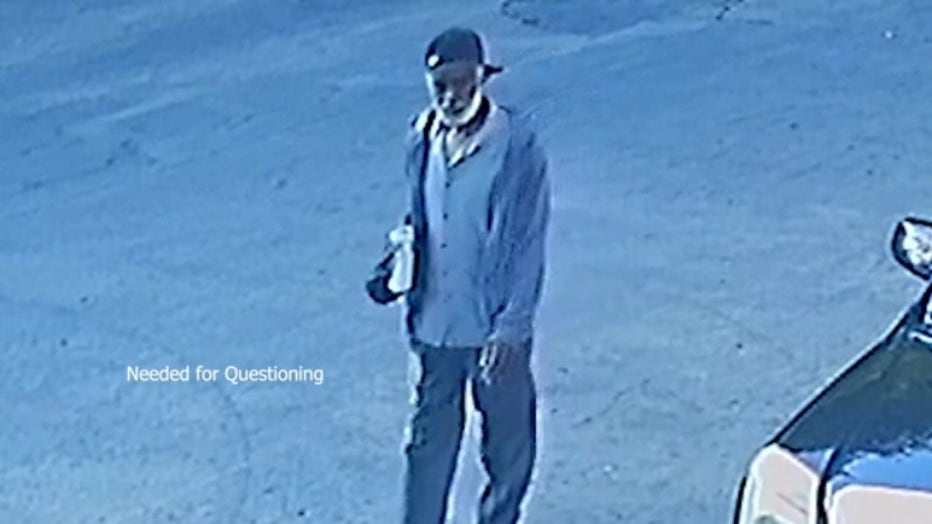 Investigators said they also want to talk to three other people who came around the back of the business. One of them was seen stopping and pulling something off of Frazier, with all three eventually gathering around looking intently at it. 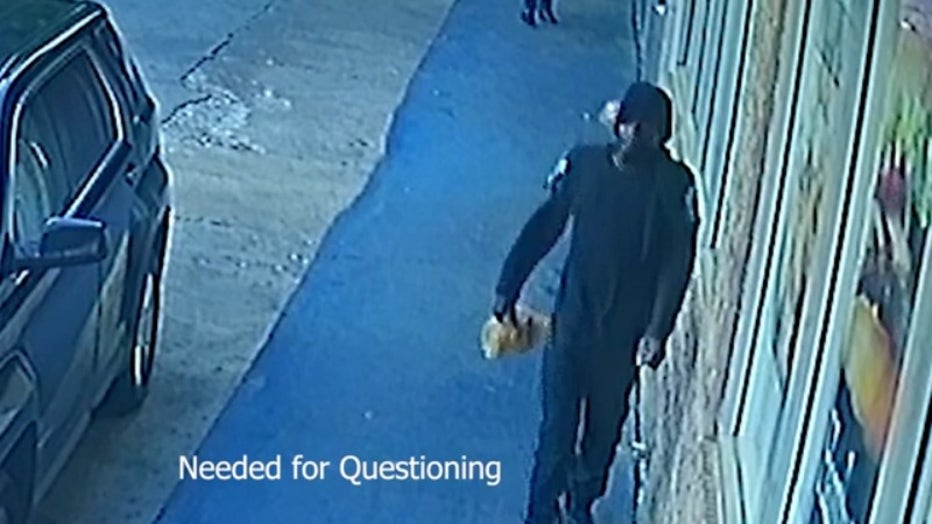 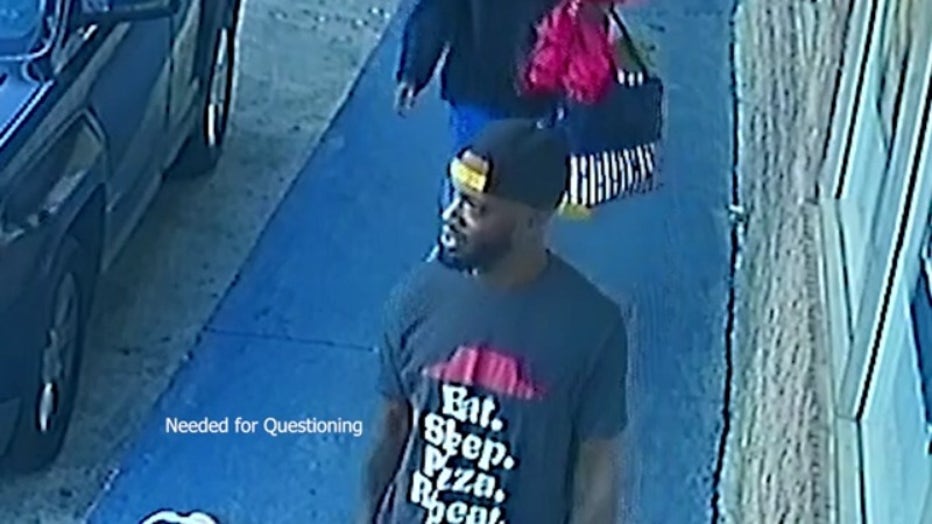 The second man was wearing a black shirt with a Pizza Hut logo on it and the words "Eat, Sleep, Pizza, Repeat" under it, a red shirt underneath the first shirt, dark pants, dark shoes, and a baseball cap that has a white front with a graphic on it and a dark back with a yellow adjustable band.

Both men were carrying plastic bags. 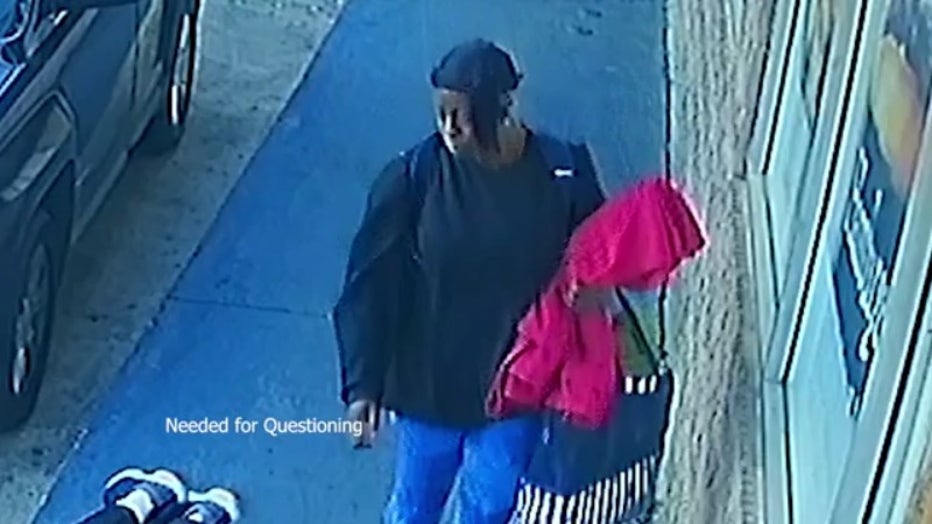 A third person, a woman wearing a dark-colored sweatshirt, a "do-rag," a dark blue backpack, a half blue and half blue and white striped tote bag that appeared to have a rolled up green towel in it, blue Capri leggings, carrying a pink jacket, and light-colored shoes.

Police and emergency crews would arrive moments after they departed.

In addition to the restaurant, the strip mall appears to have a 24-hour food mart, a tax service, a taco stand, and a bus station.

A $2,000 reward is being offered for information leading to the arrest and indictment of the gunman. Anyone with information is asked to call the Crime Stoppers Atlanta tip line at 404-577-TIPS (8477).