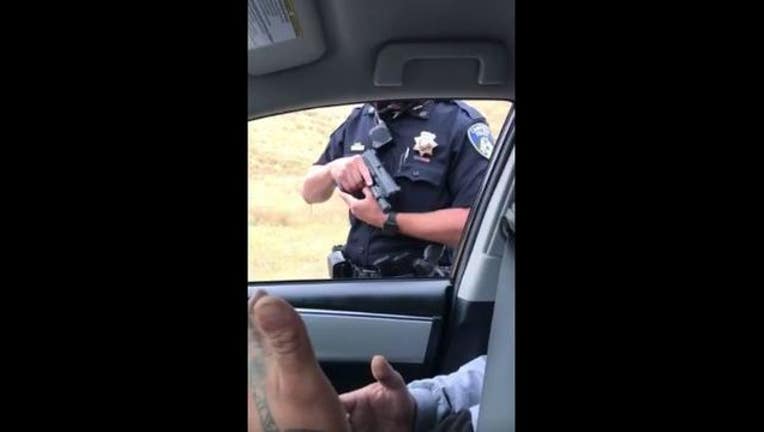 CAMPBELL, Calif. - A video showing the interaction between a Campbell police officer and two citizens during a traffic stop on Highway 101 is circulating on Facebook.

The video, filmed by the driver, is a little over nine minutes long and shows an officer pointing his gun at the passenger.

The passenger repeatedly asks the officer to stop pointing his gun, saying his hands are clearly visibly and he is complying with the officers orders.

The officer continues to point his gun into the car as he calls for backup.

According to Campbell Police, the vehicle was pulled over for speeding. The officer asked the driver for her license and additional paperwork. Police say the driver and passenger spent several minutes looking for the paperwork, when the passenger began reaching under his seat. That's when the officer perceived a threat and withdrew his gun.

"We understand that it is never a comfortable position to have a gun pointed at you, regardless of whether it is a police officer. Unfortunately, the length of time that the officer’s gun was drawn lasted much longer than normal based on his location. If this same situation would have occurred closer to back-up officers, it would most likely have been resolved much sooner," Campbell Police Public Information officer Gary Berg said in a statement.

Both the driver and the passenger were issued citations and were allowed to leave.

The video has been viewed over 650,000 times generating mixed reaction.