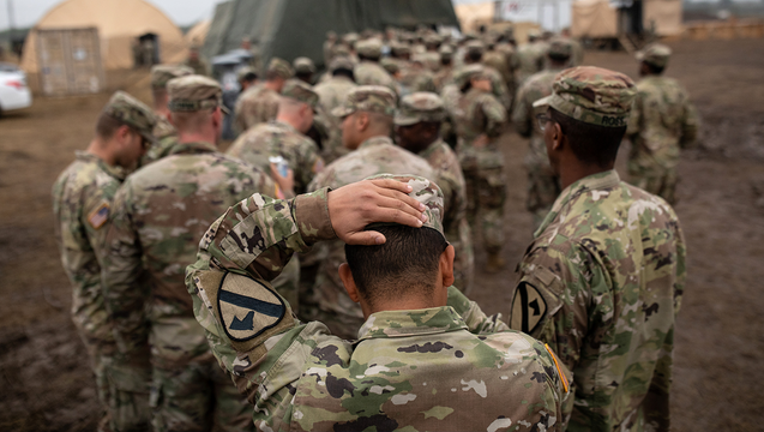 WASHINGTON (AP) - The U.S. plans to cut the number of active-duty troops along the border with Mexico but extend the unusual deployment for another 45 days, U.S. officials said Friday.

Overall troop levels assigned to assist the Department of Homeland Security with border enforcement will drop from 5,600 to about 4,000 under a new proposal from the agency to the Pentagon.

Secretary of Defense Jim Mattis was traveling and had not yet signed off on the plan but the Pentagon has been working with DHS on the request and it is expected to get approval, said the officials, who spoke on condition of anonymity.

President Donald Trump ordered the unusual deployment of active-duty troops to the border in response to a caravan of Central American migrants walking north toward the U.S. Critics dismissed the deployment as a political stunt ahead of the midterm elections

Most of the troops have been deployed in Texas, far from where the migrants eventually arrived in Tijuana, along the southern border with California. Soldiers have strung vast amounts of concertina wire and transported Border Patrol agents but have not been engaged in any law enforcement activities, which would be prohibited under U.S. law.

The initial deployment was scheduled to end Dec. 15, but Mattis and other officials had said it could be extended. The new order extends it for 45 days while still allowing about 1,600 troops to return home.

U.S. officials described the new request on condition of anonymity to discuss internal deliberations that had not yet been approved.

A Pentagon spokesman, Lt. Col. Jamie Davis, said the new DHS proposal "refines" the military support so "it remains aligned with the current threat," but declined to give details.

DHS issued a similar statement, citing the "ongoing threat at our southern border."

Officials said the troops at the border will provide support and protection for Border Patrol agents and continue to install and repair wire barriers. In addition, more troops are expected to shift from Texas and Arizona to California.

The troops at the border include combat engineers who can install and repair the concertina wire barriers, helicopter crews to provide transportation, and military police along with other service members who provide support for the troops.

As of last week, the cost of using troops to help secure the border was estimated at $210 million, but this extension is likely to increase that figure.

That total included $72 million for approximately 5,900 active-duty troops providing support to Customs and Border Protection, plus $138 million so far for 2,100 National Guard troops who have been performing a separate border mission since April, according to a report sent to Congress early last week.