A billion-dollar plan to streamline travel to Central Florida's theme parks is under development. SunRail is exploring how to get people to and from the Orlando International Airport and the attractions.

ORLANDO, Fla. - A billion-dollar plan to streamline travel to Central Florida's theme parks is under development.

SunRail is exploring how to get people to and from the Orlando International Airport and the attractions. The Sunshine Corridor would include a Brightline higher-speed train that would carry visitors from the airport to the Orange County Convention Center and then to South International Drive.

For years, the SunRail trains have made trips throughout Central Florida with very few passengers, but the Central Florida Commuter Rail Commission hopes the Sunshine Corridor with SunRail and Brightline might change that.

"Look on the platform right now. I mean, I see three people at the other end of the platform."

Orlando Mayor Buddy Dyer presented his big proposal at Thursday’s SunRail meeting. The new proposed route includes stops at Orlando International Airport, the Orange County Convention Center, and I-Drive. The mayor announced Universal would finance up to $125 million and pledge 14 acres of land for free, leading some to wonder if there may be a potential stop at Universal or any of the theme parks on this new train. 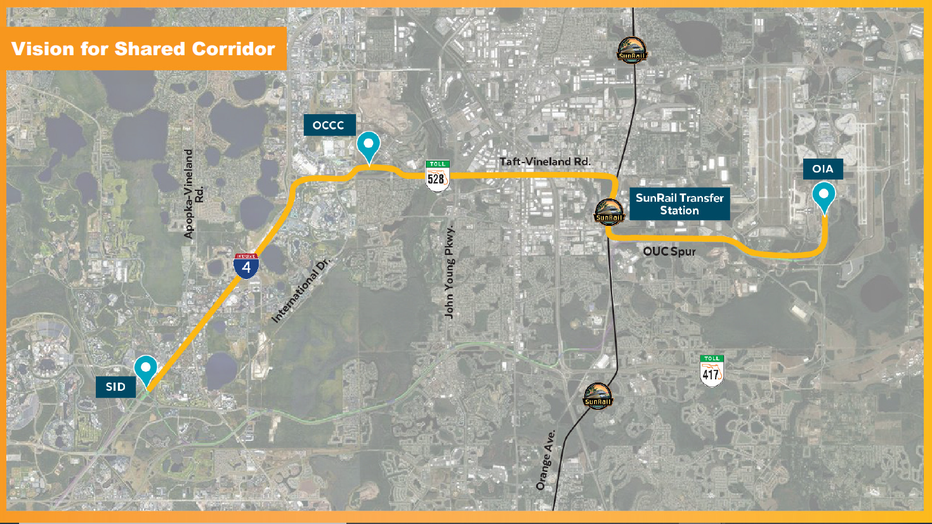 "There’s a need from the airport to the theme parks. Right now, they’re only talking about Universal. Universal was committed to be a true financial partner," said Seminole County Commissioner Bob Dallari. Dallari is also on the Central Florida Commuter Rail Commission. He’s still hesitant about this expansion project. "My concern coming from Seminole County is what’s the cost? I need to know the ridership and how it’s going to affect our county."

But some travelers told FOX 35 they wish the train was at the airport now.

"I travel a lot for work, but I also come to Disney all the time so that would be really awesome if that was an option," said Maria Smith, who’s visiting from Illinois.

"We had to rent a car which was okay until my husband left his phone in the car," said Rebecca Scheibegger, who’s visiting from Texas.

Commissioner Dallari said it’s not a done deal until all five members of the commission can agree on a plan, and a lot of details need to be worked out.