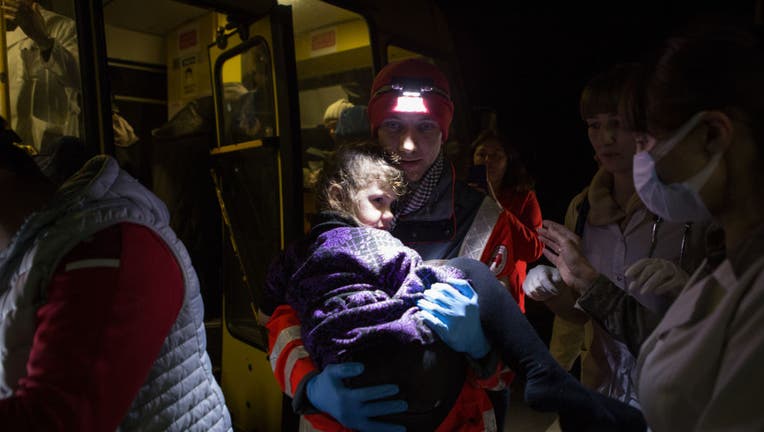 A humanitarian convoy with 42 buses arrive at a refugee hub in Zaporizhzhia from Mariupol after 42 hours evacuation process in Zaporizhzhia, Ukraine on April 1, 2022. (Photo by Andrea Carrubba/Anadolu Agency via Getty Images)

WARSAW, Poland - After spending weeks with no electricity or water in the basement of her family's home in Ukraine, Viktoriya Savyichkina made a daring escape from the besieged city of Mariupol with her 9- and 14-year-old daughters.

Their dwelling, for now, is a huge convention center in Poland's capital. Savyichkina said she saw a photo of the home in Mariupol destroyed. From a camp bed in a foreign country, the 40-year-old bookkeeper thinks about restarting her and her children's lives from square one.

"I don’t even know where we are going, how it will turn out," Savyichkina said. "I would like to go home, of course. Maybe here, I will enjoy it in Poland."

With the war in Ukraine approaching eight weeks, more than 5 million people have fled the country since Russian troops invaded on Feb. 24, the U.N. refugee agency reported Wednesday. When the number reached 4 million on March 30, the exodus exceeded the worst-case predictions of the Geneva-based U.N. High Commissioner for Refugees.

The even bigger milestone in Europe’s biggest refugee crisis since World War II was reached as Russia unleashed a full-scale offensive in eastern Ukraine that will disrupt and end more lives.

RELATED: Russia ratchets up battle for control of eastern Ukraine in 'new phase of war'

Ukraine had a pre-war population of 44 million, and UNHCR says the conflict has displaced more than 7 million people within Ukraine along with the 5.03 million who had left as of Wednesday. According to the agency, 13 million people are believed to be trapped in the war-affected areas of Ukraine.

"We’ve seen about a quarter of Ukraine’s population, more than 12 million people in total, have been forced to flee their homes, so this is a staggering amount of people," UNHCR spokesperson Shabia Mantoo told The Associated Press.

More than half of the refugees, over 2.8 million, fled at least at first to Poland. They are eligible for national ID numbers that entitle them to work, to free health care, schooling and bonuses for families with children.

Although many of have stayed there, an unknown number have traveled on to other countries. Savyichkina said she is thinking about taking her daughters to Germany.

"We hope we can live there, send children to school, find work and start life from zero," she said inside the vast premises of the Global EXPO Center in Warsaw, which is providing basic accommodations for about 800 refugees.

If "everything goes well, if the children like it first of all, then we will stay. If not...," Savyichkina said.

Further south, Hungary has emerged as a major transit point for Ukrainian refugees. Out of more than 465,000 who arrived, some 16,400 have applied for protected status, meaning they want to stay. Many are members of the ethnic Hungarian minority in Ukraine.

Hungary’s government says it has provided around $8.7 million to several charitable organizations and is giving subsidies to companies that employ Ukrainians granted asylum.

In March, a non-governmental organization, Migration Aid, rented an entire five-story building in Budapest, a former workers' hostel, to provide temporary accommodation for people escaping the war in Ukraine. It has helped some 4,000 refugees so far.

Tatiana Shulieva, 67, a retired epidemiologist who fled from Kharkiv in eastern Ukraine and wants to travel on to Egypt, said the night she spent in the hostel was "like a fairytale" after having sheltered in a basement for weeks to escape constant shelling.

Neighboring Romania has received over 750,000 refugees from Ukraine. Oxana Cotus, who fled the southern Ukrainian city of Mykolaiv with her four small children, initially decided to go to Denmark but ended up in Bucharest because she speaks Romanian and didn't want to be far from Ukraine.

She praised the help she received from the International Red Cross in helping her relocate and get settled.

"If we have a second wave of refugees, then a real problem will come because we are at capacity. We cannot accept more," Warsaw Mayor Rafal Trzaskowski told The Associated Press.

About 300,000 waar refugees are in the city of some 1.8 million, most of them staying in private homes, Trzaskowski said. Warsaw residents expected to host refugees for a few months, but not indefinitely, he said.

Polish Prime Minister Mateusz Morawiecki was in Lviv, Ukraine, on Tuesday, visiting a refugee center made of mobile modules that the governments of Ukraine and Poland jointly built to house displaced individuals who do not want to leave Ukraine.

Organizations for refugees say the best help would be for the war to stop.

"Unfortunately, without an immediate end to the fighting, the unspeakable suffering and mass displacement that we are seeing will only get worse," UNHCR's Mantoo said.

Data from Poland show that some 738,000 people have crossed back into Ukraine during the war. Some of them shuttle back and forth to do shopping in Poland, while others return to Ukraine to check on relatives and property, electing to either stay or depart again depending on what they find.

More than half of the refugees from Ukraine are children, according to UNHCR. Thousands of civilians, including children, have been killed or wounded in shelling and air strikes.

Mantoo, called the "outpouring of support and the generosity" shown to arriving Ukrainian refugees has been "remarkable."

"But what is important is that it is sustained and that it is channelled across to ensure that refugees are enabled to receive that support while the fighting continues, while they are unable to return home," she said.

Amer Cohadzic in Sarajevo, Justin Spike in Budapest and Nicolae Dumitrache in Bucharest contributed to this report.