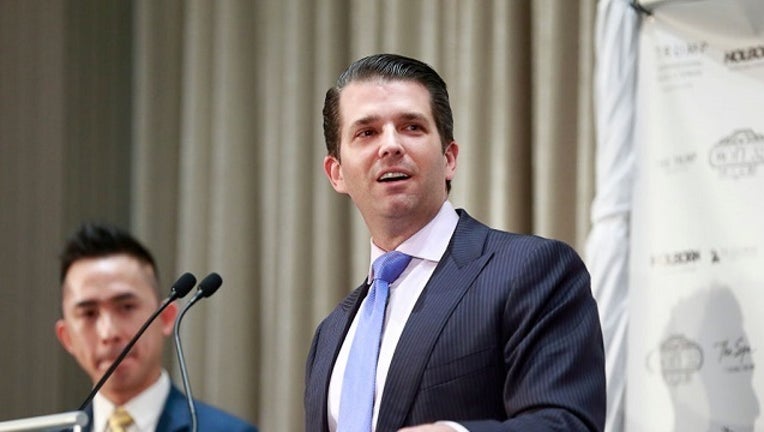 Donald Trump Jr. delivers a speech during the official opening of the Trump International Tower and Hotel in Vancouver, Canada, the first new international property since Donald Trump assumed the presidency. (Photo by Jeff Vinnick/Getty Images)

WASHINGTON (AP) - Donald Trump Jr. eagerly accepted help from what was described to him as a Russian government effort to aid his father's campaign with damaging information about Hillary Clinton, according to emails he released publicly on Tuesday.

The email exchange posted to Twitter by President Donald Trump's eldest son show plans for a meeting with a lawyer described to him as a Russian government attorney as "part of Russia and its government's support for Mr. Trump." In one of his responses to a music publicist working to set up the meeting, Trump Jr. says he would "love" to hear more.

Trump Jr., who was deeply involved in his father's presidential campaign, released the emails along with a statement describing the disclosure as an effort "to be totally transparent." The emails with publicist Rob Goldstone show that Trump Jr. was told that the Russian government had information that could "incriminate" Clinton and her dealings with Russia.

The messages were the latest disclosure to roil the ongoing investigation into potential coordination between Trump's campaign and Russia, which U.S. intelligence agencies have said sought to influence the outcome of the election in Trump's favor. As congressional committees and Special Counsel Robert Mueller, a former FBI director, investigate, the emails will almost certainly be reviewed for any signs of potential campaign collusion with the Kremlin, which the White House has repeatedly denied.

In the emails, Goldstone wrote to Trump Jr. that the information "would be very useful to your father." Goldstone was working to connect Trump Jr. to Russian attorney Natalia Veselnitskaya, who later met with Trump Jr. in New York at Trump Tower. Veselnitskaya has denied that she ever worked for the Russian government.

"If it's what you say I love it especially later in the summer," Trump Jr. replied to Goldstone in one of a series of email exchanges the younger Trump posted to Twitter.

The emails, dated early June, show Goldstone telling Trump that singer Emin Agalarov and his father, Moscow-based developer Aras Agalarov, had "helped along" the Russian government's support for Trump. The elder Agalarov was involved with Trump in hosting the 2013 Miss Universe pageant in Moscow. The two men also had preliminary discussions about building a Trump Tower in Moscow that fell through. Trump also appeared in a music video with the younger Agalarov.

Goldstone at one point said he could send the information to Trump's father first directly "via Rhona," an apparent reference to the elder Trump's longtime assistant Rhona Graff.

The email release followed days of evolving accounts from Trump Jr. about the nature of the meeting and its purpose. The president's son posted the emails only after they were obtained by The New York Times.

On Saturday, Trump Jr. described the encounter as being a "short introductory meeting" focused on the disbanded program that had allowed American adoptions of Russian children. Moscow ended the adoptions in response to Magnitsky Act sanctions created in response to alleged human rights violations in Russia.

A day later, Trump Jr. changed his account, acknowledging that he was told beforehand that Veselnitskaya might have information "helpful" to the Trump campaign, and was told by her during the meeting that she had something about Clinton.

In his third description of what occurred, on Tuesday, Trump Jr. said he had believed the information he would hear about Clinton would be political opposition research. He said that he first wanted to speak by phone, but that when that didn't work out, he was told that the attorney would be in New York "and I decided to take the meeting."

"The woman, as she has said publicly, was not a government official," Trump Jr. said in the Tuesday statement. "And, as we have said, she had no information to provide and wanted to talk about adoption policy and the Magnitsky Act."

The Trump Organization has confirmed the authenticity of Trump Jr. posts on Twitter releasing the email chain.