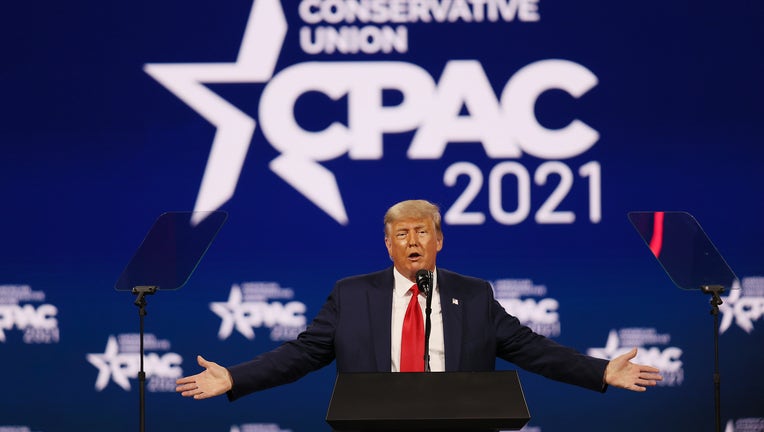 ORLANDO, Fla. - Former President Donald Trump in his Sunday address to the Conservative Political Action Conference (CPAC) clearly declared that he would not start a new political party, after some speculation last month that he might.

"We're not starting new parties. You know -- they kept saying, 'He's going to start a brand new party,'" Trump said. "We have the Republican Party. It's going to unite and be stronger than ever before."

The speculation that Trump was considering starting a new party began in the aftermath of the Jan. 6 attack on the Capitol by a pro-Trump mob. Many Republicans condemned Trump for calling a rally to Washington, D.C., for the same day Congress was set to certify President Biden's election win. They also said he did not do enough to stop the mob once the situation became dangerous.

But the outrage within the GOP eventually died down and only a handful of GOP House members and Senators voted to impeach Trump or to convict him on the impeachment charge of inciting an insurrection. As the GOP began to fully embrace Trump again, the speculation that he would start a new party largely died down.

Nevertheless, Sunday was Trump's most definitive declaration that he is committed to the GOP.

"I am not starting a new party," Trump continued. "That was fake news. Fake news, no. Wouldn't that be brilliant? Let's start a new party and let's divide our vote so that you can never win. No, we're not interested in that."

Trump then cited his straw poll numbers at CPAC, in which he won by a wide margin.

Trump got 55% of the vote in the poll in which he was included, with Florida Gov. Ron DeSantis in a distant second place at 21%.

The straw poll is not a scientific poll. CPAC advertised itself as a pro-Trump gathering, meaning that the self-selected crowd is likely more pro-Trump than the Republican Party in general. But scientific polls generally show that Trump dominates with the GOP base, even if not to the same extent as the CPAC straw poll.

In his address, the former president also said that it will be the GOP battling the left after Democrats took the Senate, House and the White House.

"For the next four years, the brave Republicans in this room will be at the heart of the effort to oppose the radical Democrats, the fake news media and their toxic cancel culture," Trump said. "And I want you to know that I am going to continue to fight right by your side. We will do what we have done right from the beginning which is to win."

Trump's speech is the final address of CPAC, which began on Thursday evening. Trump was about one hour late for the start time of his speech.

During his speech, Trump also railed against Biden on immigration and school reopenings, hinted that he might run for president in 2024, and repeated his false claims that he won the 2020 presidential election.

Fox Nation is a sponsor of CPAC.