FOX 35 Chief Meteorologist Glenn Richards is tracking a tropical depression in the Atlantic Ocean that is expected to strengthen Wednesday evening into Thursday morning.

ORLANDO, Fla. - Our next named storm of the 2020 Atlantic hurricane season could form on Wednesday, according to the National Hurricane Center (NHC).

According to the latest NHC advisory, Tropical Depression Eleven is located about 1,320 miles east-southeast of the northern Leeward Islands. It is expected to become Tropical Storm Josephine by 2 p.m. on Wednesday.

The depression is moving westward at 14 mph. It currently has maximum sustained winds of 35 mph. FOX 35 meteorologist Kristin Giannas believes the winds will get up to 60 mph while north of Puerto Rico. 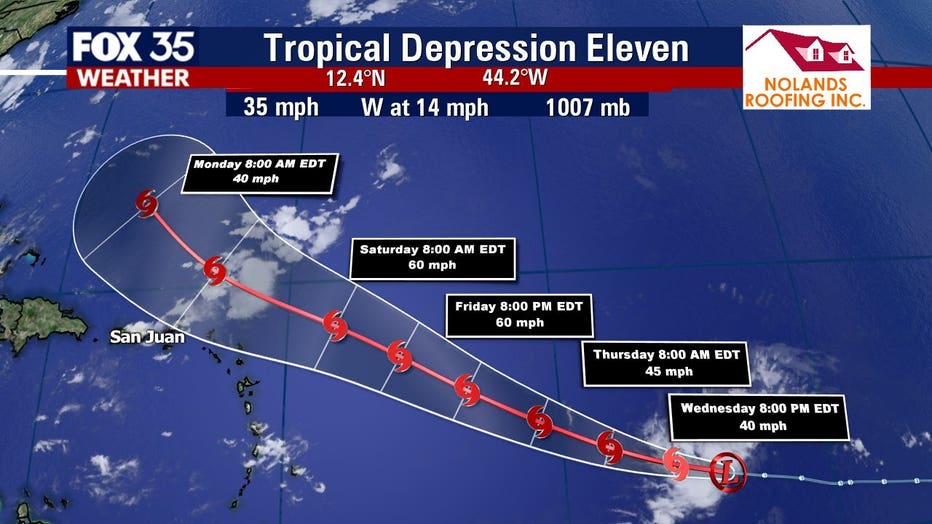 However, as the system makes its way into the western Atlantic ocean, the storm is predicted to break up and weaken. The latest track shows no impact with Florida.

Josephine would be our 10th named storm of the season if it forms.

Forecasters have predicted that the season will have more activity than normal. For example, National Oceanic and Atmospheric Administration (NOAA) predicted an above-average season, with 13 to 19 named storms. 6 to 10 of those would become hurricanes and 3 to 6 of those are forecasted to become major hurricanes (category 3 or higher).