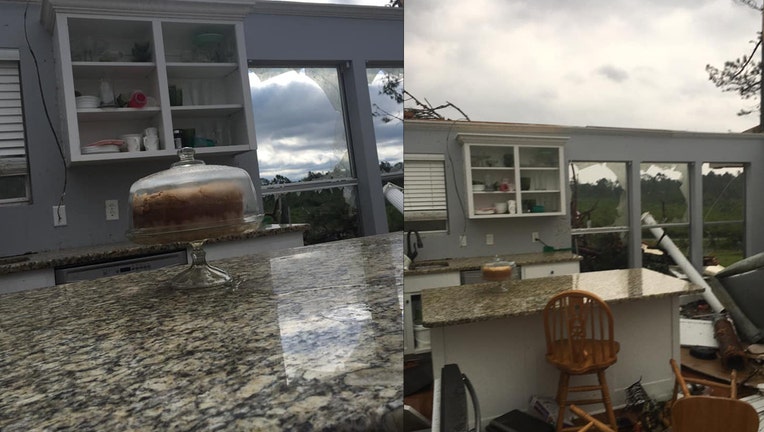 SOSO, Miss. - A series of devastating tornadoes tore through parts of the south on Easter Sunday, leaving more than 30 people dead. In Mississippi, there were at least 11 fatalities.

In Soso, Jerel Wade posted photos of the damage left behind at his parents home. Roof ripped off. Walls torn down. Trees on the ground. Wade says his parents were inside the house when the tornado struck.

Fortunately, his parents survived -- and in a very strange example of the randomness of a tornado -- so did their pound cake.

In a Facebook post, Wade wrote "My parents were home during this storm. Their house was completely destroyed. But, their lives and Mama’s pound cake were spared."

The pound cake was completely untouched, sitting in a glass jar on the kitchen counter. The dishes in the cabinet behind the cake also survived the tornado unscathed as if nothing had happened.

FOX NEWS reports that one of the dozens of tornadoes that ripped across the South on Easter Sunday was so powerful, its mark on Mississippi was picked up by satellites.

“We're used to seeing tornadoes and tornadic activity in April in Mississippi, What we're not used to is what we saw on Sunday, which was two different tornadoes basically taking the exact same path approximately one hour apart,” Mississippi Gov. Tate Reeves said.

Reeves said Wednesday the state is working in partnership with the Red Cross to provide hotel rooms for those impacted by the storms.