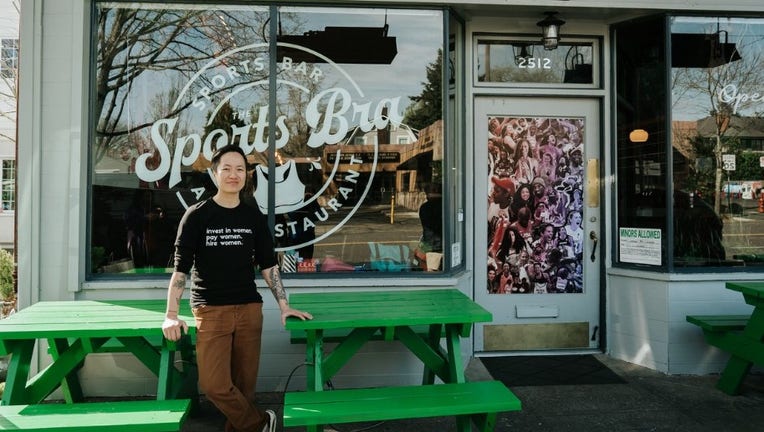 PORTLAND, Ore. - Anyone can find a bar that shows men’s sports, but Jenny Nguyen wanted to change that when she opened a bar in Portland, Oregon, that only shows women’s sports.

"The Sports Bra" opened its doors this month in Northeast Portland with a "mission to make great food and delicious drinks, and provide a space that supports, empowers, and promotes girls and women in sports and in the community."

"When I first set out on this journey to open up, I had no idea the impact it would have on so many so quickly," said Nguyen. "And we are just getting started."

The bar features five televisions and offers standard pub food such as burgers, sliders and tater tots. Nguyen said some of the recipes will be from women in her family and she plans to source ingredients from women-owned businesses.

"The statistics about girls and women dropping out of sports are staggering," she added. "Girls who play sports have higher self-esteem and a more positive body image. The Bra will be more than just a place to view women’s sports. It gives people a space to be together and celebrate. It can star with the viewing, and then expand to how that could grow into a larger movement."

Photos show the inside of The Sports Bra.  (Shannon Dupre)

The idea for "The Sports Bra" started in April 2018 after Nguyen and a few friends wanted to catch the NCAA Women’s Championship game. They were able to watch it at a local bar but they sat in a corner and watched it on a tiny television, Nguyen said.

According to a 2021 USC/Purdue University study, 95% of total television coverage as well as the ESPN highlights show SportsCenter focused on men’s sports in 2019.

Youngest woman, 19, to fly alone around world had to combat extreme weather

Zara Rutherford set a world record as the youngest woman to fly solo around the globe. Rutherford tells FOX Weather’s Ian Oliver what weather challenges she overcame during the journey.

"The more attention we draw to viewers demanding women’s sports coverage, the more power we have as a community to push for change and equity!" she continued.