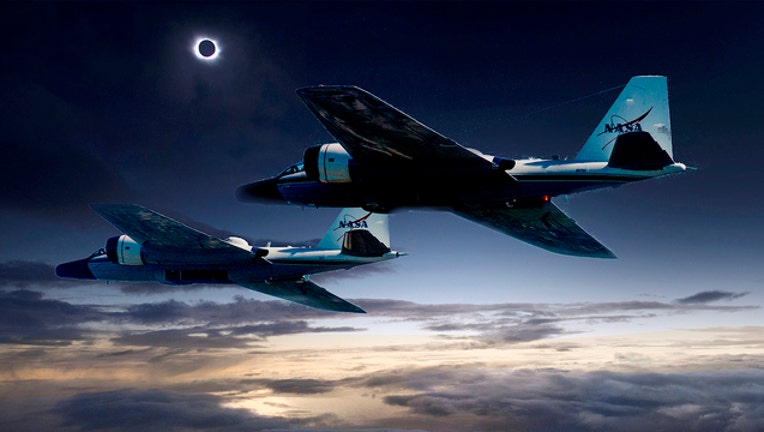 Now that the total solar eclipse is just days away, many Americans have already made travel plans to see the rare event.  The narrow swath of totality – where the moon will completely block out the sun – stretches in a line from Oregon to South Carolina, offering a lot of potential viewing spots.

With millions of people on the move, you’re probably out of luck if you haven’t made plans yet.  And even if you have, your destination probably isn’t as cool as these.

Sure, there’s plenty of coastline in the U.S. But only two small beaches in the whole country will have an opportunity to see the eclipse in full totality.  The moon’s shadow comes ashore over the Fogarty Creek State Recreation Area in Oregon and leaves dry land a few hours later over Cape Romain National Wildlife Refuge in South Carolina.  Neither park is equipped to handle a large volume of people, but for those few who make it, their day at the beach will be unforgettable.

FROM A CRUISE SHIP

Royal Caribbean is offering an “eclipse-themed” sailing out of Florida, right next to Cape Canaveral. Vacationers on Oasis of the Seas will steam out to a spot in the Atlantic to witness the full eclipse before heading on to a few days in the Caribbean.  Inland, the Cumberland River Cruise will give 150 tourists the chance to watch totality from an old-fashioned paddlewheeler on the mighty Mississippi.

The iconic arch is right on the edge of the path of totality, where the sun will look almost – but not completely – blocked by the sun.  But that won’t stop hundreds of thousands of people from flocking to the area, some of whom will no doubt hope to get the unique view of the black-hole sun seemingly encased inside the arch itself.

FALLING THROUGH THE SKY

Eclipse skydiving is a thing – one group even claims to hold the world record – and there will be plenty of it on August 21. Online message board and blogs are filled with everyone from novices to experts making plans, though most packages are already sold out, despite prices running into the thousands of dollars.  Just don’t forget to pull that rip cord while you’re taking in the unique view of the eclipse.

Grab a hot dog, peanuts, and…some eclipse glasses? The Salem-Keizer (Oregon) Volcanoes, a minor-league affiliate of the San Francisco Giants, will be wearing special eclipse jerseys for an early game at Volcanoes Stadium, which is in the path of totality.  They plan to pause the action after roughly one inning so that fans and players can watch the eclipse and are touting it as baseball's first-ever planned ‘eclipse delay.’

Much of the eclipse path travels over relatively rural stretches of Idaho, Wyoming, and Nebraska.  But Mount Rushmore in southern South Dakota is a popular destination that will provide a unique backdrop for the event, which will appear as a 96-percent complete eclipse in that area. Just make sure you leave your drone at home, though.

THE STATUE OF LIBERTY

New York City is not particularly close to totality, but getting a shot of the partially-eclipsed sun passing close to Lady Liberty’s torch would still be a rare opportunity.  Ferries to the island can be packed on a typical summer day, and lines will certainly be long on August 21 as tourists set sail.  Some groups are offering special eclipse trips around the harbor with complementary viewing glasses and drinks.

Clouds and rain have spoiled plenty of eclipses throughout history, but one way to beat Mother Nature is to get above the clouds.  Southwest Airlines is offering eclipse flights, though any north-south commercial flight that afternoon should have a pretty good view.  One of the most exclusive views, though, will be from NASA’s WB-57 aircraft, which will be flying east, chasing the eclipse and studying the sun from high in the stratosphere.

When the eclipse starts on the west coast of North America, the sun will already be well up in the sky.  If you go further west – 2,000 miles west, about halfway between the Aleutian Islands and Hawaii – you’ll be able to catch the rare eclipsed sunrise.  But that’s in the middle of the Pacific Ocean, so you’d better start paddling now.

The International Space Station circles the Earth every 90 minutes, so the astronauts aboard will encounter the eclipse three different times.  None of those passes are through the path of totality, though – they will see it as 37-percent, 44-percent, and then 85-percent eclipsed.  So while observers on the ground may technically have a better view of the total eclipse, it’s probably safe to say they astronauts’ view will still be far cooler.