Colon cancer screenings should begin at age 45, not 50

Americans should start getting screened for colon cancer earlier, at age 45 instead of waiting until they're 50.

Researchers have found evidence that suggests people who are taller could have an increased risk of developing colorectal cancer, also known as colon or rectal cancer.

There are several factors that have been proven to increase a person’s risk of being diagnosed with colon cancer, some of which are unavoidable such as family history.

Some modifiable risk factors include an unhealthy diet, not enough exercise, smoking and high alcohol consumption.

However, scientists now believe a person’s height is another unavoidable factor that could increase a person’s risk of colon cancer, according to a new study published in the journal American Association for Cancer Research.

For the study, researchers observed adults between the ages of 40 and 85 who were undergoing outpatient colonoscopy for colorectal cancer screening. The individuals had to have no prior history of colon cancer, inflammatory bowel disease, collagenous or autoimmune colitis, ischemic bowel and other illnesses that could lead to colon cancer.

Researchers found that the individuals who were taller had a 24% higher risk of developing colorectal cancer as opposed to their shorter counterparts.

"Every 10-cm increase in height imposed a 14% higher risk of colorectal cancer after adjusting for demographic, socioeconomic, behavioral, and other known risk factors," study authors wrote.

Researchers suggested the reason why taller people may be at higher risk for being diagnosed with colorectal cancer is that they have more body mass, thus have an increased chance of developing a malformation such as a colon adenoma.

"More active cell proliferation in organs of taller people could increase the possibility of mutations leading to malignant transformation," the study added. 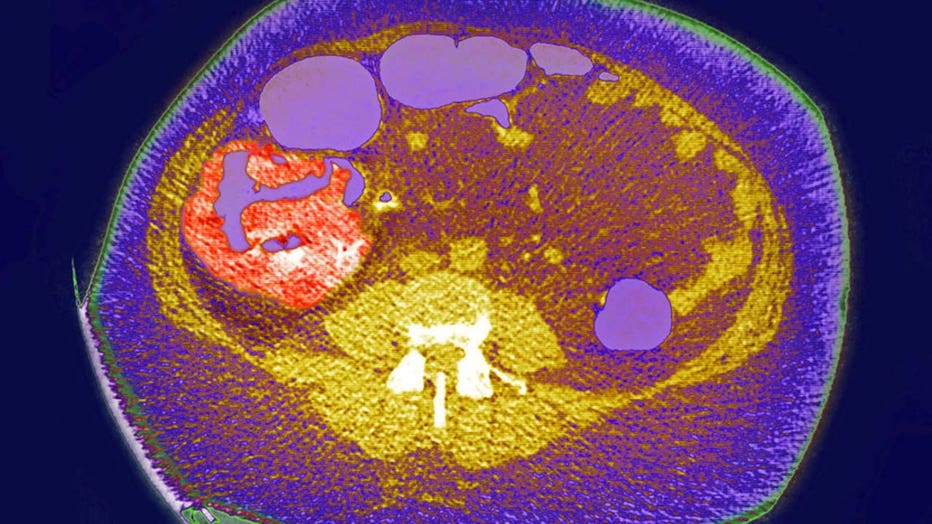 FILE - Colon cancer, tumor on the caecum and ileocolic valve, visualization on a radial CT scan.

Colon adenomas are polyps that develop in the lining of the colon, according to Mercy Health. These growths could be benign but could also eventually turn into cancer if not treated.

The significant limitation of the study, however, is reporting precise height parameters, researchers said.

"Due to the observational nature and method limitations of included studies, our findings need to be interpreted with caution. Ideally, a randomized controlled trial is needed to establish the causal association between an exposure and the outcome, as observational studies are subject to confounding. However, in our case, height cannot be randomized," the study continued.

Colorectal cancer is the third most common cancer in men and the second most in women in the United States, according to the American Cancer Society.

"In the United States, colorectal cancer is the third leading cause of cancer-related deaths in men and in women, and the second most common cause of cancer deaths when men and women are combined. It's expected to cause about 52,580 deaths during 2022," the American Cancer Society said.

In 2021, the U.S. Preventive Services Task Force released new guidelines that suggested Americans should start getting screened for colon cancer earlier — at age 45 instead of waiting until they’re 50.

The decision, published in the Journal of the American Medical Association, means most insurance plans would have to cover the checks with no copay. The change brings the task force in line with the American Cancer Society, which lowered its recommended screening age to 45 in 2018.

The new advice shows "45 is the new 50 for this important cancer prevention screening intervention," Dr. Kimmie Ng of the Dana Farber Cancer Institute, who wasn’t involved in the task force deliberations, wrote in JAMA.

How often people need to get checked depends on the type of screening they choose. There are a variety of options, including yearly stool-based tests or colonoscopies that may be done every 10 years.