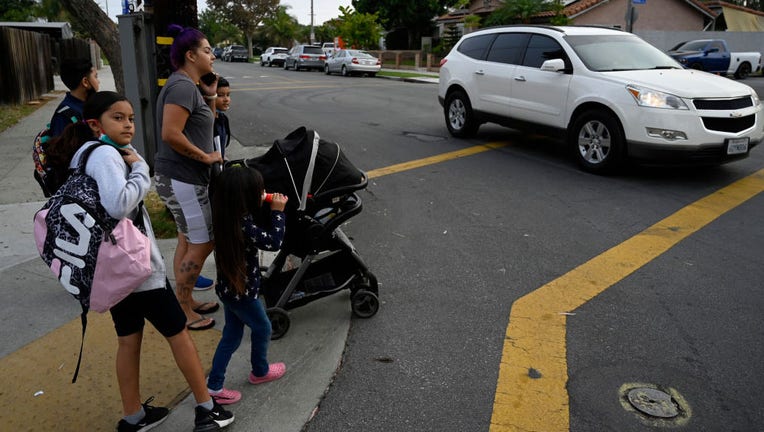 FILE-Students and parents at a crosswalk as an SUV drives on street. (Brittany Murray/MediaNews Group/Long Beach Press-Telegram via Getty Images)

DETROIT - Drivers of bigger vehicles such as pickup trucks and SUVs are more likely to hit pedestrians while making turns than drivers of cars, according to a new study.

The research released Thursday by the Insurance Institute for Highway Safety points to the increasing popularity of larger vehicles as a possible factor in rising pedestrian deaths on U.S. roads. The authors also questioned whether wider pillars holding up roofs of the larger vehicles make it harder for drivers to spot people walking near the corners of vehicles.

"The link between these vehicle types and certain common pedestrian crashes points to another way that the increase in SUVs on the roads might be changing the crash picture," said Jessica Cicchino, a study author and vice president of research for the institute.

Although the study mentioned previous research showing blind spots caused by the "A-pillars" between the windshield and the cabin, the authors said more study is needed to link the blind spots to the increased deaths.

In 2020, the last year for which complete statistics are available, 6,519 pedestrians were killed in the U.S., according to government data. That's up 59% since 2009, and a 4% increase from 2019, the National Highway Traffic Safety Administration said.

Over the same time period, SUV and pickup truck sales have skyrocketed. In 2009, pickup trucks, SUVs and vans accounted for 47% of all U.S. new vehicle sales, according to Motorintelligence.com. Last year, light trucks were more than three-quarters of new vehicle sales.

Not all SUVs and pickup trucks have the blind spots, though. Compact SUVs, for instance, are now the largest part of the U.S. market.

The study also found that the larger vehicles were more likely than cars to be involved in crashes where pedestrians were standing, walking or running near the edge of the road and away from intersections.

Researchers studied federal crash statistics in which pedestrians were killed, as well as all pedestrian crashes reported to police in North Carolina from 2010 through 2018.

The North Carolina statistics showed that pickups were 42% more likely than cars to hit pedestrians while making left turns. SUVs were 23% more likely to hit people than cars. There was no significant difference in the odds of a right turn crash for the different types of vehicles, the study showed.

Outside of intersections, pickups were 80% more likely than cars to hit a pedestrian along the road. SUVs were 61% more likely, and minivans were 45% more likely to hit people than cars, IIHS said.

RELATED: 'She tried to kill me:' Viral video shows pedestrian mowed down by SUV near 26th and Atkinson

Trucks, SUVs and vans typically have thicker "A-Pillars" than cars because of federal roof-strength standards to prevent collapse in rollover crashes, the IIHS said. The pillars typically are wider because they have to withstand the higher weights of the bigger vehicles.

And the pillars aren't the only things creating blind spots in the bigger vehicles. Consumer Reports found last year that high hoods also obstructed driver views of pedestrians crossing in front of the vehicles.

"To see over that high hood, you're going to be looking further down the road," said Jennifer Stockburger, director of operations at Consumer Reports' auto test center.

The magazine and website found that pickup truck hood heights have risen 11% since 2000. The hood of a 2017 Ford F-250 heavy-duty pickup was 55 inches off the ground, as tall as the roofs of some cars, Stockburger said.

RELATED: Is October the Most Dangerous Month for Pedestrians? What Drivers and Walkers Need to Know

Ford, General Motors and Stellantis, which sell the bulk of the large SUVs and pickups in the U.S., all declined comment on the study. Messages were left seeking comment from Auto Innovators, an industry trade group.

Automakers could use stronger metals to make the A-Pillars smaller and increase visibility, said Wen Hu, an IIHS senior transportation engineer and another study author. "These larger vehicles, they need stronger pillars, we all understand that," she said. "Increasing the size of the A-Pillar is not the only way to increase the strength."

Most automakers have promised to make automatic emergency braking standard equipment on nearly all of their new models by September of this year. In addition, federal safety regulators are proposing to make the systems mandatory on all new vehicles.