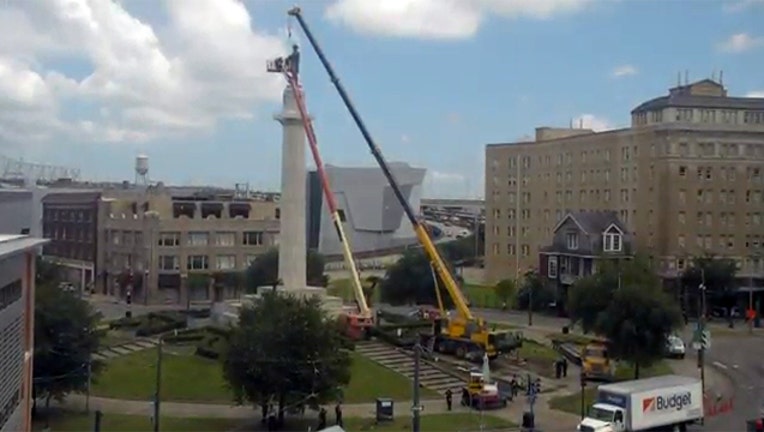 NEW ORLEANS (AP) - New Orleans Mayor Mitch Landrieu says taking down a prominent statue of Confederate Gen. Robert E. Lee will allow his city to "heal and become the city we always should have been."

Lee's statue comes down Friday, the last of four Confederate-related statues to be removed from public property in the Louisiana city.

Landrieu plans to address city residents later in the afternoon. He says in an interview with The Associated Press that "we don't want these statues in places of reverence; they need to be in places of remembrance."

Three other Confederacy-related statues were removed at night. The mayor says the Lee statue is coming down in the daytime because officials couldn't guarantee the safety of construction workers from nearby electrical lines if they worked at night.

About 100 people were on hand as a huge crane arrived at the monument earlier in the day.

The statue of Lee sits atop a 60-foot-high pedestal, where it was been since 1884. Opinions on the removal varied and crossed racial lines.

A racially mixed group held signs supporting removal.  One onlooker, John Renner, a white man and an Illinois native, said the statue should remain because it represents history.  Al Kennedy, also white and a former New Orleans school board member, supported removal. Kennedy says he loves his native South. Of the Confederate past, he says: "It's my history, but it's not my heritage."

Lee commanded Confederate armies against the United States in the Civil War and is a revered figure among supporters of the old South.