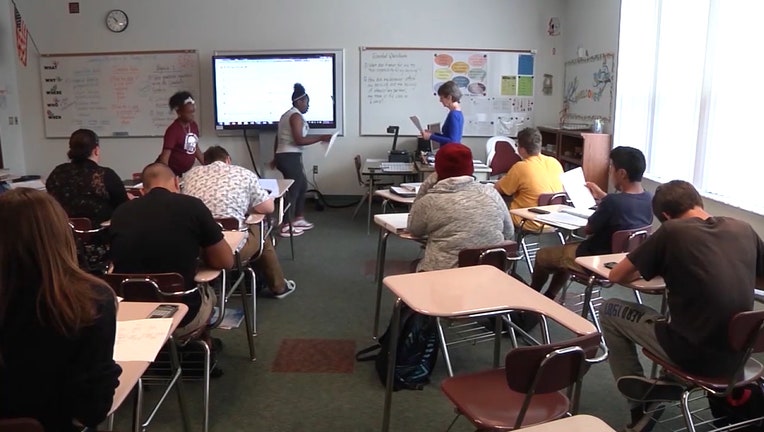 TALLAHASSEE, Fla. - A statewide grand jury has issued a report painting a dire picture of how Florida school districts are implementing security measures passed in response to a mass shooting at a Broward County high school nearly two years ago.

Gov. Ron DeSantis requested the grand jury, which was impaneled in February, to investigate whether school districts are complying with mandatory safety measures enacted in the wake of a 2018 shooting at Marjory Stoneman Douglas High School in Parkland. Seventeen students and staff members were killed in the shooting, and 17 other people were injured.

The report by the grand jury --- comprised of jurors drawn from Broward, Miami-Dade and Palm Beach counties --- said many school districts have security plans that are “held together with nothing more than chewing gum, duct tape and hope."

The report also flagged a number of issues deemed urgent enough for lawmakers to address during the upcoming legislative session which begins Jan. 14.

“The fact that we have directives that are not being fulfilled for one reason or another is of concern,” Galvano, R-Bradenton, said during a pre-session interview with The News Service of Florida on Thursday.

Some of the problems outlined by the grand jury are not new, including issues with charter schools complying with a state requirement that schools have armed security on campuses.

The report also noted the “ineffectiveness” of law-enforcement radio systems used by first responders during mass-shootings and other emergencies.

“Squabbling between local and regional stakeholders over land rights, quality of service and the financing of various projects actively and currently hampers the stakeholders’ overall ability to identify and communicate potential threats and to react appropriately in crisis scenarios,” the grand jury wrote.

Addressing the issue of armed security in schools, the grand jury found a lack of state funding has played a role in non-compliance.

Many charter schools and some traditional public schools in small counties receive $11,000 to cover the costs of armed security, according to the report.

But the amount, the grand jury wrote, is “not even close enough to reasonably cover the cost” of a full-time security guard or law enforcement officer.

The grand jury recommended state lawmakers create a grant program for public schools that lack sufficient resources to pay for the security officers.

In June, the Marjory Stoneman Douglas High School Public Safety Commission found that nearly 200 charter schools did not have a full-time security officer, as required by state law, before the new school year began.

“This grand jury is a diverse body composed of members from all walks of life, but not one of us can fathom how school districts with tens of thousands of employees cannot find a way to plan for at least one school safety officer on every school campus over six months after the second law requiring them has taken effect,” the grand jury chided.

The report also said charter schools appear to have “temporary fixes” in place.

“They have arranged for the legal bare minimum, but any minor change in circumstances could easily cause them to fall into noncompliance,” the report said.

The grand jury also noted the school guardian program, which allows specially trained school personnel to carry guns at schools, has at times led to “completely avoidable waste of resources.”

Some school personnel completed state-funded guardian training "only to later be told" they could not participate in the program "due to defects in their backgrounds, psychological evaluations, or due to their failure in some other aspect of the vetting process," according to the report.

“Not only does this waster taxpayer resources, it compromises the plans of school officials who believe they are making sufficient efforts toward compliance only to later find out that their intended designees are not eligible to serve,” the grand jury wrote.

The panel suggested the Legislature “clarify” state law to ensure school personnel only can receive guardian training after they “successfully complete the vetting process.”

The grand jury also recommended that the Florida Department of Education be authorized to monitor school districts and enforce compliance with school-safety laws passed by the Legislature.

“We believe the mere existence of a state-level, permanent, capable investigatory agency with the power to impose a broad variety of penalties on non-compliant school districts will go a long way toward fixing the compliance issues that exist today,” the grand jury said.

Attorney General Ashley Moody urged school officials throughout the state to comply with the safety mandates.

“As attorney general and as a mother, the safety of our children is of paramount importance to me and this latest grand jury report confirms what many of us have feared --- that our schools are still not as safe as they could be," Moody said in a prepared statement following the release of the report.

Sen. Lauren Book, a Plantation Democrat who served on the statewide commission that investigated the Feb. 14, 2018 shooting and made its own sets of recommendations, said “the fact that many of the same critical safety issues that allowed one of the nation’s deadliest school shootings to occur still persist today should scare us all.”

Book accused some school districts of “continuing to subvert the law out of convenience or self-interest.”

“We cannot tolerate this,” she said in a press release. “Florida’s schools can and must be safe places.”