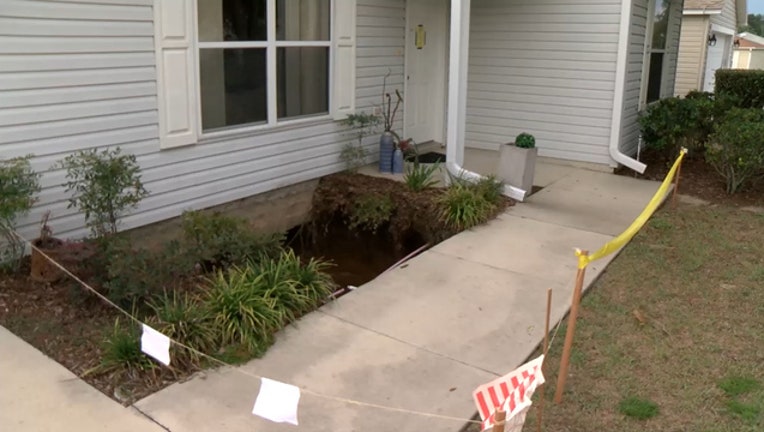 THE VILLAGES, Fla. (WOFL FOX 35) - Neighbors say an elderly woman who lives on Abercrombie Way in The Villages was grabbing the paper outside her home Saturday morning when she discovered a sinkhole.

“Boy it’s really deep,” said neighbor Edith Wilson. “We all looked and then we went back, because they came out and said, ‘You need to step because we don’t know how far it goes down.”

The sinkhole is right up against the front of the house. The Villages Public Safety Department says it’s around 20 feet deep. The home is now wrapped with yellow tape and a paper posted on the door says it’s currently not safe to live inside.

“It was just a shock to find out that there was one next door and so close – it’s just a little bit scary,” said neighbor Roberta Patterson.

Just a few days ago, other sinkholes opened up at The Villages. And over the weekend, a sinkhole nearly swallowed a car in Ocala.

Residents say the sinkholes are nerve wracking but unavoidable.

“It’s a fact of life down here in Florida,” Patterson said. “You’re gonna run into them all around Florida no matter where.”

The good news in the case from Abercrombie Way is that officials say there doesn’t appear to be any structural damage. No work on when the homeowner will be able to return.