A sign in Brevard County honoring two civil rights activists who were killed by the Ku Klux Klan has been removed because it has been riddled by bullets. The sign marks a stretch of roadway which serves as a memorial highway in recognition of Harry T. and Harriette V. Moore.

MIMS, Fla. - A roadside dedication marker on the Brevard-Volusia County line has been removed after it appeared to have been shot with a shotgun.

The Florida Department of Transportation (FDOT) confirmed that the sign on State Road 46 was removed Friday and a replacement is being expedited.

The reason for the rush: who that sign represents.

The sign dedicates a stretch of the highway to local civil rights pioneers Harry and Harriette Moore. Among other accomplishments, the Moores established the local NAACP in the area and helped sign up thousands of black Floridians to vote for the first time.

It’s because of that history that those keeping the Moores’ legacy alive don’t believe the gunshot was a coincidence. 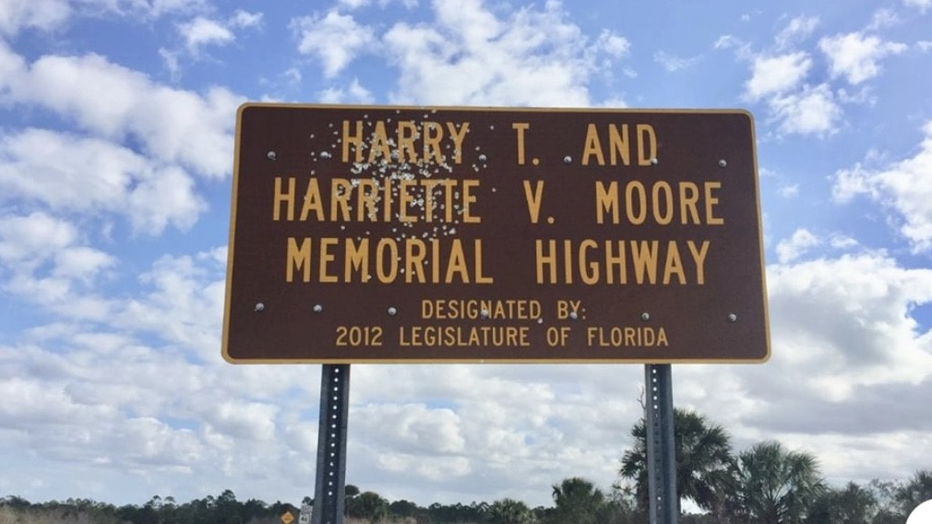 The Moore Complex that Gary heads sits on the same land where the Moores’ home sat in Mims; the site of the Christmas night 1951 bombing that killed both Harry and Harriette and was eventually found to be perpetrated by members of the Klu Klux Klan.

Gary said they have seen past instances of hateful acts targeting the Moores’ memorials taking place around Christmas. He believes the shot to the sign may just be the latest example.

The sign at the east-side of the dedicated road, the one right in Mims, was not damaged nor does it appear were any other signs on the stretch of 46.

Gary said if the shot was fired out of hate as they believe, it doesn’t deter their mission at the Moore Center and just shows how important the couple’s legacy truly is.

"People of color who have done courageous things in the State of Florida and I think it's just a testament to the environment we live in right now,” said Gary.

An FDOT spokesman said Monday that the agency is pushing to get a replacement sign up as quickly as possible, though an exact timeline was not yet available.