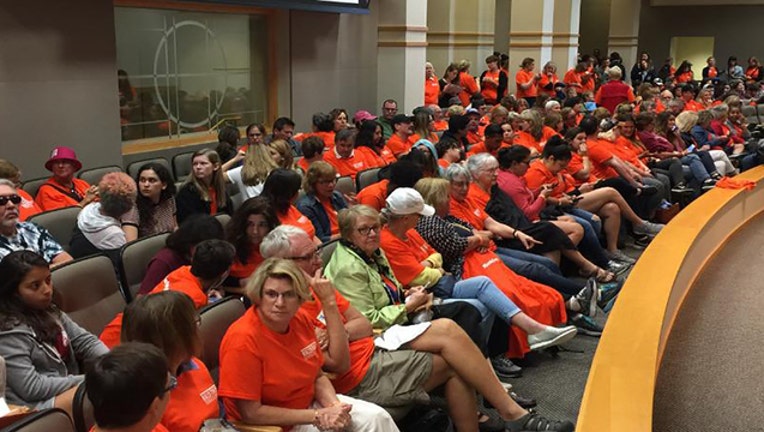 TALLAHASSEE, Fla. (NSF) - The emotionally raw conversation about guns escalated Monday in the Capitol, as a group of gun-control advocates flailed a key Senate panel considering legislation that students, parents and educators angrily argued would do little to make Florida’s schools safer because it does not include a ban on assault-style weapons.

The intense debate came during a Senate Rules Committee hearing on a broad package addressing school safety, guns and mental health, in response to this month’s massacre at Marjory Stoneman Douglas High School in Parkland that left 17 people, including 14 students, dead.

More than 1,000 people, many of them wearing “Rally in Tally” neon orange T-shirts emblazoned with #GunReformNow, traveled by bus to Tallahassee to rally and meet with lawmakers before attending the Rules Committee meeting, where the outspoken and frustrated crowd berated members of the panel.

The sea of orange confronted senators during a discussion of an amendment, sponsored by Sen. Jose Javier Rodriguez, that would ban more than a dozen types of semi-automatic, assault-style weapons like the one used by 19-year-old Nikolas Cruz to mow down students and teachers at the Broward County school.

In the days following the Valentine’s Day mass shooting, many students from the Broward County school have pleaded with lawmakers --- and President Donald Trump and Gov. Rick Scott --- for the prohibition on assault-style weapons, an idea opposed by the powerful National Rifle Association and many leaders of the Republican-controlled Legislature.

“Assault weapons are weapons of war. They’re designed for the battlefield and then modified for civilian use … to efficiently extinguish human life,” Rodriguez, a Miami Democrat who is running for Congress, said.

Eric Friday, general counsel for the gun-rights group Florida Carry, likened the weapons targeted in Rodriguez’s amendment to the “equivalent of the same hunting rifle my father and grandfather used.”

The comments of the gun-rights proponents elicited jeers and hisses from the overflow crowd and drew a rebuke from two 15-year-old survivors of the catastrophic event.

"I don’t understand how you can find the hobby of murdering animals the same importance as the murdering of my classmates and teachers," Bela Urbina said. "This weapon has killed so many people. It is a militarized weapon that we don’t need. We don’t need civilians to have it."

Her friend Katherine Guerra was even more pointed.

"Do you think that your sport is more important than human lives? And if you believe that, you need to reassess yourselves," she said.

The raucous crowd erupted in applause for the girls, wearing their school colors of burgundy and silver.

Dozens of speakers lined up to weigh in on the proposal. Nearly all of them spoke heatedly in favor of the ban.

“Shame on all of you,” Andy Oliver, a Methodist pastor from St. Petersburg, angrily scolded lawmakers for failing to enact stricter gun laws in the wake of previous mass shootings, including the 2016 murders of 49 clubgoers at the Pulse nightclub in Orlando. “The blood is on your hands.”

The amendment failed in a 7-6 vote, with Miami Republican Anitere Flores crossing party lines to join Democrats, who voted as a bloc in favor of the proposed ban on assault-style weapons.

After the ban failed, the crowd again erupted, threatening lawmakers with being voted out of office in November.

The overall package approved by the Rules Committee would allow specially trained teachers to bring guns to schools, prohibit people younger than 21 from buying rifles or other long guns, and give law enforcement officers the ability to get court orders to take guns away from mentally ill people they deem dangerous.

Parkland Mayor Christine Hunschofsky read notes of support for the bill, even without the prohibition on assault weapons, from the parents of two students who were killed. Fred Guttenberg, whose 14-year-old daughter Jamie was slain, called the proposal a “minimally acceptable first step.”

Hunschofsky said her community is “still grieving and mourning” the event that rocked the tight-knit enclave in northern Broward County.

“Everybody knew somebody who was affected,” the mayor said. “It’s a very difficult time for all of us.”

Hunschofsky said the bill isn’t perfect but she supports the measure.

“My friends who just buried their children, they want action,” she said. “I remind everybody, three weeks ago, I don’t think anyone in the state of Florida would have thought we would ever be discussing a bill like this. So I appreciate any step in the right direction.”

The mayor said she was “not a fan” of a controversial element in the bill that would allow teachers who receive special training and are deputized by the local sheriff to serve as school “marshals.” School districts could choose whether they want to participate in the program.

The school marshal program, not included in a similar package being pushed by Scott, would require trained teachers to be “distinctly and visually identifiable to responding law enforcement officers, faculty, staff, and students, in the case of any active assailant incident on a sponsoring school district’s campus.”

But Rodriguez asked if such an identification program would potentially make teachers “become targets of mass shooters rather than individuals who are presumably helping defend us.”

Sen. Bill Galvano, a Bradenton Republican who is sponsoring the $400 million package, said it would be up to local law enforcement “to make sure they know who these participants are and how to identify them.”

Senate Minority Leader Oscar Braynon, who is black, said he fears that arming teachers could have disastrous consequences, especially for minority children.

Braynon, D-Miami Gardens, said he was unable to vote for a bill that “puts children that look like me, look like my child, in harm’s way.”

“I just cannot do it,” Braynon said.

Before the committee signed off on the sweeping measure (SB 7026) in a 9-4 vote, Galvano noted that lawmakers are hurriedly acting to respond to the catastrophe with the goal of preventing others.

And Galvano acknowledged the topic of guns evokes passion, as it did during Monday’s 3 ½-hour meeting. He praised the Legislature for being willing to “revisit” gun regulations.

“That’s not been a debate that this Legislature has ever meaningfully had since I’ve been elected,” the Bradenton Republican, who’s served in the Legislature for more than 14 years, said. “There’s still work to do, but I ask you to join me in supporting this major step in moving this to the next committee so that we never have to endure a tragedy like we have recently endured again.”

After the meeting, Hammer told The News Service of Florida the NRA does not support the measure.

“The bill contains gratuitous gun control language that will not save kids. We support hardening the schools. We support keeping guns out of the hands of the mentally ill. We support putting armed security in the schools. We do not support taking away Second Amendment rights of law-abiding citizens because a mentally ill young man who should have been stopped numerous times by the system wasn’t stopped, and gun owners are being blamed,” she said.