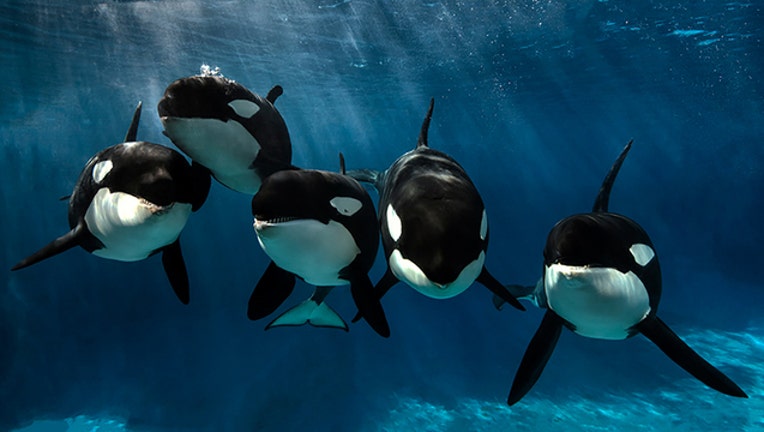 Company officials told The Associated Press that the three were particularly aggressive but the order would not bar them from its other parks in San Antonio and Orlando, Florida. The court plans to hold a hearing before deciding, the documents say.

Lange said SeaWorld's action is retaliation for the complaint the trio filed to press charges against the company's head of security in San Diego. They said some of the protesters were thrown to the ground.

"I think it's an odd reaction for SeaWorld. Instead of saying to their security guy, 'Hey, you're not allowed to beat people up,' they seek a restraining order against us," said Lange, who works for PETA in Los Angeles. "He really roughed us up."

Lange said it won't stop her from protesting against SeaWorld. The two other activists could not be immediately reached for comment.

Wearing a "SeaWorld Sucks" T-shirt, Cromwell and six activists with the People for the Ethical Treatment of Animals barged in to the "Orca Encounter" show July 24 and spoke through a megaphone demanding SeaWorld release its orcas living in tanks and move them to massive pens in the ocean.

Cromwell, who starred in the movie "Babe," told park visitors that SeaWorld was condemning the orcas to premature deaths unless they are moved immediately to ocean sanctuaries.

When park security asked them to leave, the protesters locked arms, went limp and refused. After they were removed by force, SeaWorld alleges one protester later lashed out at a security guard.

PETA has denied the allegations and said the security guard manhandled the three protesters, wrestled phones away and threw two of them to the ground, sat on them and put a knee on a woman's chest until she yelled that she could not breathe.

PETA said in a statement after the arrests that it was a "non-confrontational protest against cruelty to marine life" and that the protesters obeyed the uniformed officers.

Cromwell, who was handcuffed and escorted out of the park, was separated from the other demonstrators when they were taken away.

Fernandez, Rodriguez and Lange were charged with criminal trespassing last month, and one of them also was charged with assault and battery, according to SeaWorld.

If the order is issued and the trio tries to enter the San Diego parks, the company will call police, said Marilyn Hannes, president of SeaWorld's San Diego park.

"We certainly respect free speech. When they demonstrate on SeaWorld Drive, we are respectful and understand that. But this is not about that at all," Hannes said. "This is really about safety."

PETA has long been known for its stunts to draw attention to its protests. But Hannes said it has been escalating in recent months.

"Now that it's gotten to the point of becoming violent, that is beyond acceptable," she said. "We're very proud of the conduct of our security team under difficult circumstances."

Hannes said the request for a restraining order is the first such action taken by SeaWorld that she knows of in her 20 years working at the San Diego marine park.

The educational attraction called "Orca Encounter" debuted this summer at the San Diego park as part of the Orlando-based entertainment company's move to end its world-famous killer whale shows amid public pressure that has intensified after the 2013 release of "Blackfish," a documentary critical of SeaWorld's orca care.

SeaWorld has said the new "natural orca encounters" will replace the theatrical shows.