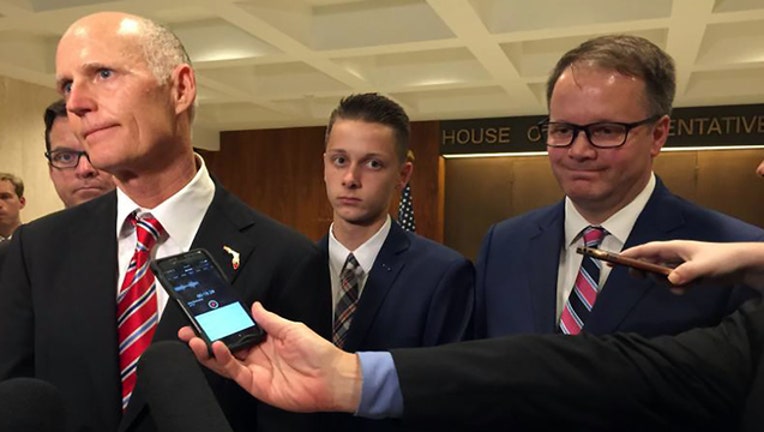 TALLAHASSEE, Fla. (NSF) - Accompanied by the father and brother of a student slain during last month’s mass shooting in Parkland, Gov. Rick Scott made a rare appearance before the House and Senate on Thursday to urge lawmakers to pass a sweeping measure aimed at making schools safer and keeping guns out of the hands of mentally ill people.

The governor’s direct message to the Legislature, with the aid of grieving parent Ryan Petty, came as the House earlier in the day put a school-safety plan on hold. Republican leaders acknowledged the plan --- opposed by the powerful National Rifle Association, black lawmakers, some survivors of the massacre at Marjory Stoneman Douglas High School and others --- needs more work.

Scott is touting an alternative plan that relies heavily on putting law enforcement officers in schools.

“If this devolves into a gun control debate, we are going to miss our opportunity to get something done. What’s different about the governor’s plan is that we are focusing on securing our schools,” Petty, whose 14-year-old daughter Alaina was among the 17 people killed by gunman Nikolas Cruz on Feb. 14, told reporters after pleading with lawmakers in both chambers to pass a bill.

But with little more than a week until the end of the legislative session on March 9, the school safety proposals --- which address a wide range of issues including mental-health screening and services and school hardening --- face pushback from politicians on both ends of the gun-control spectrum.

Many House Republicans and the NRA are opposed to proposed regulations that would raise age requirements from 18 to 21 and impose a three-day waiting period for the purchase of rifles and other long guns. Proposals would also allow law enforcement officers to seize weapons from people who pose a danger to themselves or others and ban the sale of what are known as “bump stocks.”

Democrats are frustrated because the proposals, crafted by Republican leaders, fail to include a ban on assault-style weapons such as the semi-automatic rifle used by Cruz in killing 14 students and three faculty members at Marjory Stoneman Douglas High.

But much of the debate has focused on a contentious component of House and Senate proposals known as the “school marshal” program. It would allow specially trained teachers and other school workers, who are deputized by local law enforcement authorities, to carry guns to school, a program Scott, Democrats and many of the Parkland parents and students are shunning.

“I want to make sure that there’s a law enforcement presence at our schools. I don’t believe in arming the teachers. I’ve been clear about that since I put out my proposal last week,” Scott, flanked by Petty and Petty’s son Patrick, told reporters after speaking during House and Senate floor sessions Thursday afternoon.

Scott later summoned a half-dozen Republican and Democratic legislative leaders to his office, seeking input on how to ensure the passage of a school safety measure.

The House was supposed to begin debate Friday on its measure (HB 7021) but instead will wait until the Senate acts on its version, according to House Rules & Policy Chairman Jose Oliva, R-Miami Lakes.

“The conversation has been about making sure that our bills line up, so that we can take up a bill that we can all agree on, at least in large part, and that we can pass out of the House,” Oliva told the House on Thursday.

But many Republican members are balking at casting a “yes” vote for a bill the NRA opposes.

Rep. Joe Gruters, the chairman of the Sarasota County Republican Party, said a vote in favor of the proposal could doom the political futures of Republican House members seeking higher office. The Second Amendment is the primary issue for 18 percent of GOP primary voters, he said.

Voting to “diminish the constitutional rights of citizens regarding the Second Amendment” is “alienating a huge portion of your base,” Gruters, who said he’s leaning toward a “yes” vote, told The News Service of Florida.

“But I can tell you, as a party chairman, as a 10-year leader of the Republican Party of Sarasota, I’ve been losing sleep every night over it,” said Gruters, who is leaving the House this year to run for the Senate.

He said he agrees that gun owners shouldn’t be punished for the actions of people who break the law, a talking point espoused by the NRA.

“What you’re asking Republicans to do, if you vote for this, you’re toast. If you want to move up, you’re toast,” he said. “Policy-wise, you may think it’s reasonable and the right thing to do. But if you’re on the right, and you sign onto this bill, you vote for this bill, it’s going to cost you. At home. And it’s going to cost you your next election.”

For the past three days, the governor has held a series of press conferences with sheriffs around the state to highlight his $500 million package, which would require, among other things, school boards to assign a law enforcement officer to each school and at least one resource officer for every 1,000 students.

Scott also wants an $185 million increase to the state’s “safe schools” funding, currently at $64.5 million. The House’s plan would increase the safe schools program, used mainly to pay for school resource officers, by $97.5 million, and the Senate would boost the program by $75 million. The funding is part of ongoing budget negotiations between the two chambers. The House and Senate have also included $67.5 million for the school marshal program.

Schools would need an extra $116 million to cover the cost of a single resource officer in each of the state’s 4,000-plus schools, according to data gathered by the Department of Education from school districts after the Parkland catastrophe.

Scott --- whose plan does not include the three-day waiting period on gun purchases --- would not say whether he would veto a measure with the school marshals in it.

But Sen. Bill Galvano, a Bradenton Republican who is the Senate’s chief negotiator with the House and Scott, said everyone needs to compromise, as many of the Parkland parents have indicated they are willing to do.

“Eventually we’re going to have to agree between the two chambers and we’re going to send him some legislation,” Galvano, who will take over as Senate president this fall, told the News Service before meeting with Scott. “There’s too much positive for some disagreement on a plan that has not even been elected to go into place for him not to support the bill.”

Rep. Jared Moskowitz, a Coral Springs Democrat who graduated from the Parkland high school, said he is conflicted about the measure.

Many of his constituents, including those who oppose the marshal program, are demanding that the Legislature take action. They support other elements of the proposals, such as early mental health screening and sharing of information between social service agencies, schools and law enforcement.

But Moskowitz, who also met Thursday with Scott, said survivors and grieving family members “have been taken hostage” by the legislative process.