The President of European Commission and other world leaders convenes a global pledging event, 'Stand up for Ukraine' in wake of Russian invasion.

The U.S. numbers alone are mounting: more than 12,000 weapons designed to defeat armored vehicles, some 1,400 shoulder-fired Stinger missiles to shoot down aircraft and more than 50 million rounds of ammunition, among many other things. Dozens of other nations are adding to the totals.

President Joe Biden on Wednesday approved another $800 million worth of military assistance, including additional helicopters and the first provision of American artillery.

These armaments have helped an under-gunned Ukrainian military defy predictions that it would be quickly overrun by Russia. They explain in part why Russian President Vladimir Putin’s army gave up, at least for now, its attempt to capture Kyiv, the capital, and has narrowed its focus to battling for eastern and southern Ukraine. 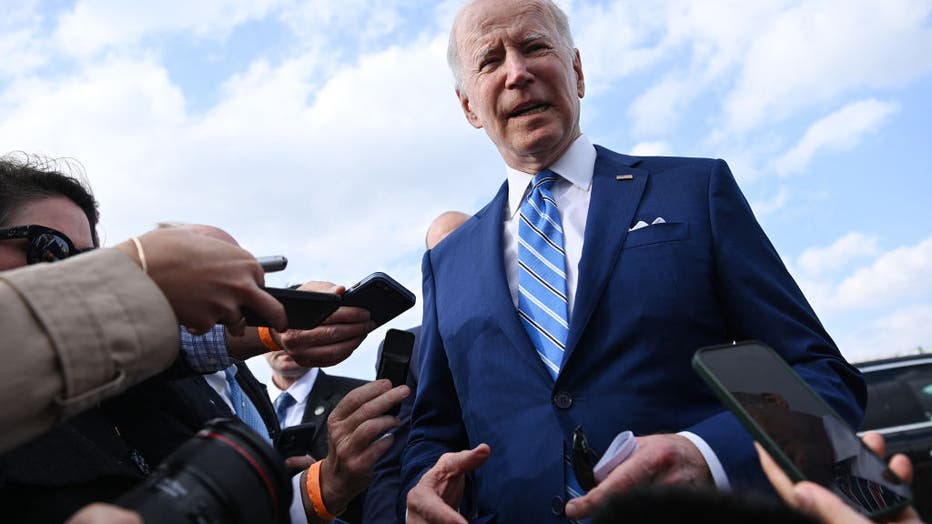 FILE - President Joe Biden speaks to members of the media prior to boarding Air Force One at Des Moines International Airport in Des Moines, Iowa, on April 12, 2022. (Photo by MANDEL NGAN/AFP via Getty Images)

U.S. officials and analysts offer numerous explanations for why the Russians have had so little success interdicting Western arms moving overland from neighboring countries, including Poland. Among the likely reasons: Russia's failure to win full control of Ukraine's skies has limited its use of air power. Also, the Russians have struggled to deliver weapons and supplies to their own troops in Ukraine.

"The short answer to the question is that they are an epically incompetent army badly led from the very top," said James Stavridis, a retired U.S. Navy admiral who was the top NATO commander in Europe from 2009 to 2013.

The Russians also face practical obstacles. Robert G. Bell, a longtime NATO official and now a professor at the Sam Nunn School of International Affairs at Georgia Tech University, said the shipments lend themselves to being hidden or disguised in ways that can make them elusive to the Russians — "short of having a network of espionage on the scene" to pinpoint the convoys' movements.

"It’s not as easy to stop this assistance flow as it might seem," said Stephen Biddle, a professor of international and public affairs at Columbia University. "Things like ammunition and shoulder-fired missiles can be transported in trucks that look just like any other commercial truck. And the trucks carrying the munitions the Russians want to interdict are just a small part of a much larger flow of goods and commerce moving around in Poland and Ukraine and across the border.

"So the Russians have to find the needle in this very big haystack to destroy the weapons and ammo they’re after and not waste scarce munitions on trucks full of printer paper or baby diapers or who knows what."

RELATED: Putin vows to press invasion of Ukraine until Russia's goals are met

Even with this Western assistance it's uncertain whether Ukraine will ultimately prevail against a bigger Russian force. The Biden administration has drawn the line at committing U.S. troops to the fight. It has opted instead to orchestrate international condemnation and economic sanctions, provide intelligence information, bolster NATO's eastern flank to deter a wider war with Russia and donate weapons.

"We warned the United States that pumping weapons into Ukraine from a number of countries as it has orchestrated isn’t just a dangerous move but an action that turns the respective convoys into legitimate targets," he said in televised remarks. 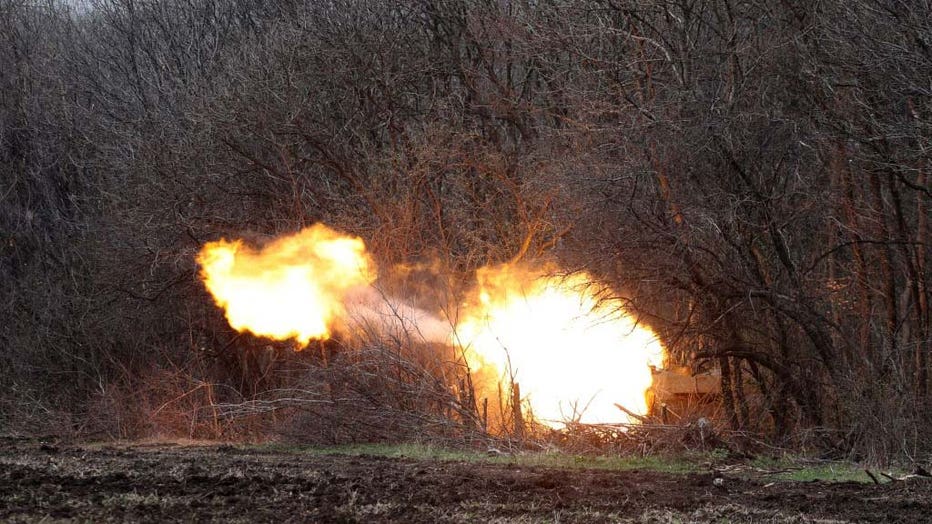 Ukrainian artillery shells Russian troops' position on the front line near Lysychansk in the Luhansk region on April 12, 2022. (Photo by ANATOLII STEPANOV/AFP via Getty Images)

But thus far the Russians appear not to have put a high priority on arms interdiction, perhaps because their air force is leery of flying into Ukraine's air defenses to search out and attack supply convoys on the move. They have struck fixed sites like arms depots and fuel storage locations, but to limited effect.

On Monday, the Russians said they destroyed four S-300 surface-to-air missile launchers that had been given to Ukraine by an unspecified European country. Slovakia, a NATO member that shares a border with Ukraine, donated just such a system last week but denied it had been destroyed. On Tuesday, the Russian Ministry of Defense said long-range missiles were used to hit two Ukrainian ammo depots.

As the fighting intensifies in the Donbas and perhaps along the coastal corridor to the Russian-annexed Crimean Peninsula, Putin may feel compelled to strike harder at the arms pipeline, which Ukrainian President Volodymyr Zelenskyy has called vital to his nation's survival.

RELATED: 'It's not the end': The children who survived Bucha's horror

In the meantime, a staggering volume and range of war materiel is arriving almost daily.

"The scope and speed of our support to meeting Ukraine’s defense needs are unprecedented in modern times," said John Kirby, the Pentagon press secretary. He said the approximately $2.6 billion in weapons and other material that has been offered to Ukraine since the beginning of the Biden administration is equivalent to more than half of Ukraine's normal defense budget.

One example: The Pentagon says it has provided more than 5,000 Javelin missiles, which are among the world's most effective weapons against tanks and other armored vehicles — and can even take down a low-flying helicopter. The missile, shaped like a clunky dumb bell and weighing 50 pounds (23 kilograms), is fired by an individual soldier; from its launch tube it flies up at a steep angle and descends directly onto its target in what its known as a curveball shot — hitting the top of a tank where its armor is weakest.

The Pentagon said Wednesday that an unspecified number of additional Javelins are to be delivered by Thursday, and the U.S. will complete the delivery of 100 armed Switchblade "kamikaze" drones this week.

The specific routes used to move the U.S. and other Western materials into Ukraine are secret for security reasons, but the basic process is not. Just this week, two U.S. military cargo planes arrived in Eastern Europe with items ranging from machine guns and small arms ammunition to body armor and grenades, the Pentagon said.

A similar load is due later this week to complete delivery of $800 million in assistance approved by Biden just one month ago. The weapons and equipment are offloaded, moved onto trucks and driven into Ukraine by Ukrainian soldiers for delivery.

Kirby said the material sometimes reaches troops in the field within 48 hours of entering Ukraine.