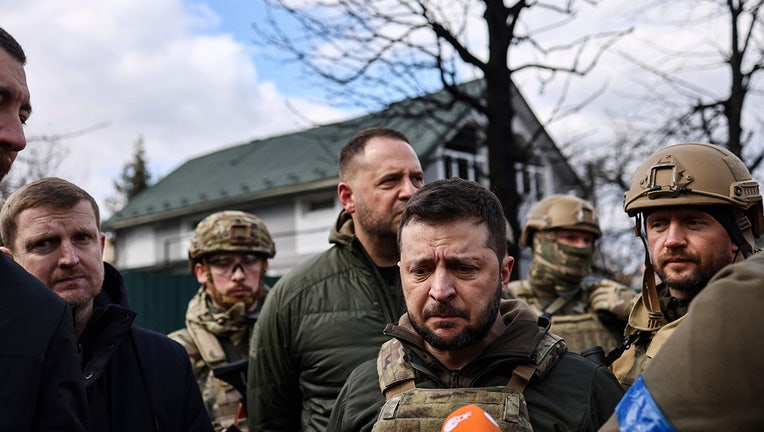 Ukainian President Volodymyr Zelensky (C) speaks to the press in the town of Bucha, northwest of the Ukrainian capital Kyiv, on April 4, 2022. (Photo by RONALDO SCHEMIDT/AFP via Getty Images)

KYIV, Ukraine - Moscow faced global revulsion and accusations of war crimes Monday after the Russian pullout from the outskirts of Kyiv revealed streets, buildings and yards strewn with corpses of what appeared to be civilians, many of them evidently killed at close range.

The grisly images of battered or burned bodies left out in the open or hastily buried led to calls for tougher sanctions against the Kremlin, especially a cutoff of fuel imports from Russia. Germany and France reacted by expelling dozens of Russian diplomats, suggesting they were spies, and U.S. President Joe Biden said Russian leader Vladimir Putin should be tried for war crimes.

"This guy is brutal, and what’s happening in Bucha is outrageous," Biden said, referring to the town northwest of the capital that was the scene of some of the horrors. 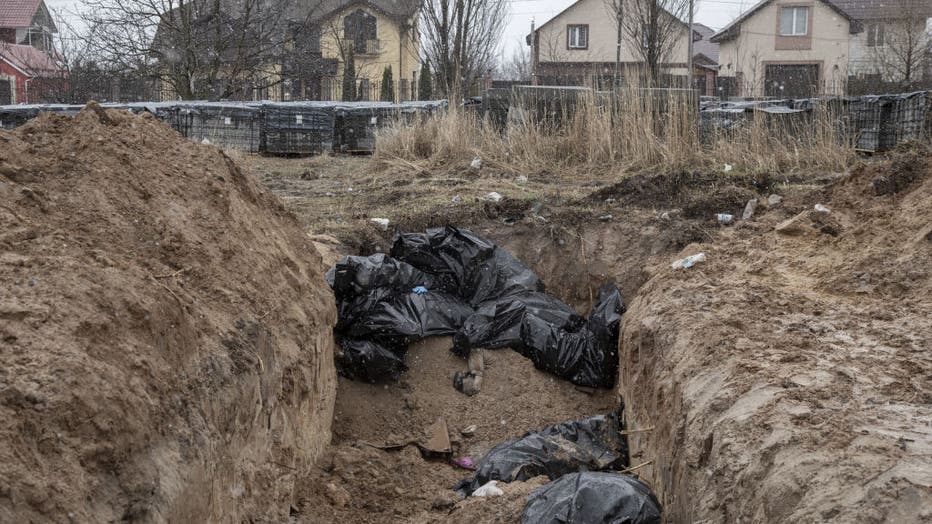 GRAPHIC: BUCHA, KYIV PROVINCE, UKRAINE, APRIL 03: Bodies of civilians are seen in a mass grave in the town of Bucha, on the outskirts of Kyiv, after the Ukrainian army secured the area following the withdrawal of the Russian army from the Kyiv region

Ukrainian President Volodymyr Zelenskyy left the capital, Kyiv, for his first reported trip since the war began nearly six weeks ago to see for himself what he called the "genocide" and "war crimes" in Bucha.

In his nightly video address, Zelenskyy pledged that Ukraine would work with the European Union and the International Criminal Court to identify Russian fighters involved in any atrocities.

"The time will come when every Russian will learn the whole truth about who among their fellow citizens killed, who gave orders, who turned a blind eye to the murders," he said.

Russia has similarly rejected previous allegations of atrocities as fabrications on Ukraine’s part.

Ukrainian officials said the bodies of at least 410 civilians have been found in towns around Kyiv that were recaptured from Russian forces in recent days.

The Ukrainian prosecutor-general’s office described one room discovered in Bucha as a "torture chamber." In a statement, it said the bodies of five men with their hands bound were found in the basement of a children’s sanatorium where civilians were tortured and killed.

Associated Press journalists saw dozens of bodies in Bucha, including at least 13 in and around a building that local people said Russian troops used as a base. Three other bodies were found in a stairwell, and a group of six were burned together. 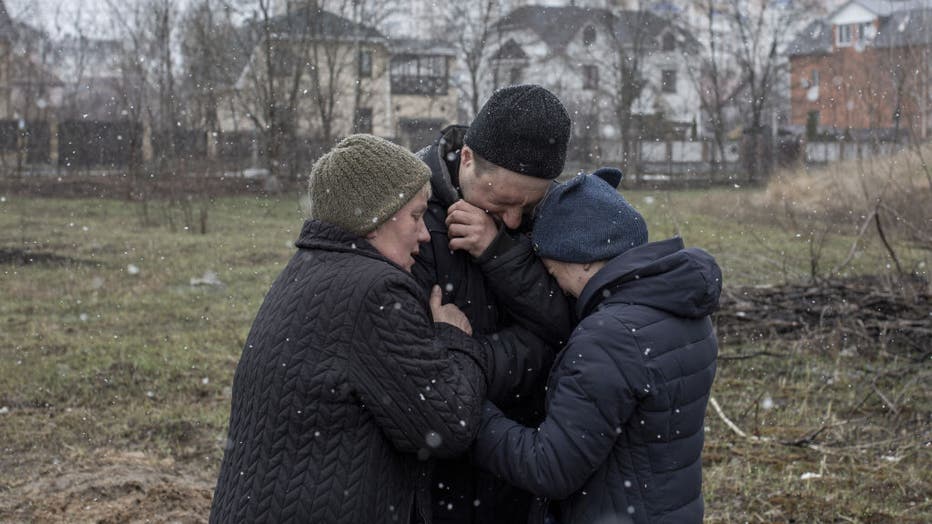 BUCHA, KYIV PROVINCE, UKRAINE, APRIL 03: A family grieves for a missing relative in front of a mass grave in the town of Bucha, on the outskirts of Kyiv, after the Ukrainian army secured the area following the withdrawal of the Russian army from the

Many victims seen by AP appeared to have been shot at close range. Some were shot in the head. At least two had their hands tied. A bag of spilled groceries lay near one victim.

The dead witnessed by the news agency's journalists also included bodies wrapped in black plastic, piled on one end of a mass grave in a Bucha churchyard. Many of those victims had been shot in cars or killed in explosions trying to flee the city. With the morgue full and the cemetery impossible to reach, the churchyard was the only place to keep the dead, Father Andrii Galavin said.

Tanya Nedashkivs’ka said she buried her husband in a garden outside their apartment building after he was detained by Russian troops. His body was one of those left heaped in a stairwell.

Another Bucha resident, Volodymyr Pilhutskyi, said his neighbor Pavlo Vlasenko was taken away by Russian soldiers because the military-style pants he was wearing and the uniforms that Vlasenko said belonged to his security guard son appeared suspicious. When Vlasenko’s body was later found, it had burn marks from a flamethrower, his neighbor said.

"I came closer and saw that his body was burnt," Pilhutskyi said. "They didn’t just shoot him."

Russia's U.N. ambassador, Vassily Nebenzia, insisted Monday at a news conference that during the time that Bucha was under Russian control, "not a single local person has suffered from any violent action."

However, high-resolution satellite imagery by commercial provider Maxar Technologies showed that many of the bodies have been lying in the open for weeks, during the time that Russian forces were in Bucha. The New York Times first reported on the satellite images showing the dead.

In other developments, more than 1,500 civilians were evacuated Monday from the besieged and devastated port city of Mariupol in the south, using the dwindling number of private vehicles available to get out, Ukrainian Deputy Prime Minister Iryna Vereshchuk said.

But amid the fighting, a Red Cross-accompanied convoy of buses that has been thwarted for days on end in a bid to deliver supplies and evacuate residents was again unable to get inside the city, Vereshchuk said.

European leaders and the United Nations human rights chief joined the Ukrainians in condemning the bloodshed that was exposed after Russian troops withdrew from the area around Kyiv.

At the same time, many warned that the full extent of the horrors has yet to emerge. 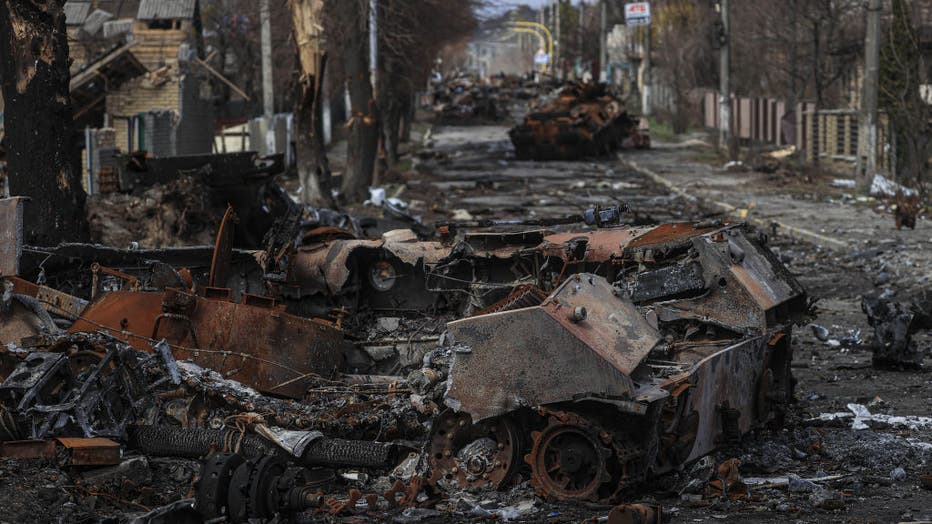 BUCHA, UKRAINE - APRIL 04: A photo shows massive destruction in the area of conflict at the Bucha town after it was liberated from Russian army in Ukraine on April 4, 2022. (Photo by Metin Aktas/Anadolu Agency via Getty Images)

"I can tell you without exaggeration but with great sorrow that the situation in Mariupol is much worse compared to what we’ve seen in Bucha and other cities, towns, and villages nearby Kyiv," Ukrainian Foreign Minister Dmytro Kuleba said.

Zelenskyy was due to speak to a previously scheduled U.N. Security Counsel meeting Tuesday. Britain’s U.N. ambassador, Barbara Woodward, said the session was certain to focus on the killing of large numbers of civilians in Ukraine.

Western and Ukrainian leaders have accused Russia of war crimes before, and the International Criminal Court’s prosecutor has already opened an investigation. But the latest reports ratcheted up the condemnation.

German Foreign Minister Annalena Baerbock said the images from Bucha reveal the "unbelievable brutality of the Russian leadership and those who follow its propaganda." And French President Emmanuel Macron said there is "clear evidence of war crimes" in Bucha that demand new punitive measures.

"I’m in favor of a new round of sanctions and in particular on coal and gasoline. We need to act," he said on France-Inter radio.

Though united in outrage, the European allies appeared split on how to respond. While Poland urged Europe to quickly wean itself off Russian energy, Germany said it would stick with a gradual approach of phasing out coal and oil imports over the next several months.

The U.S. and its allies have sought to punish Russia for the invasion by imposing sweeping sanctions but fear further harm to the global economy, which is still recovering from the pandemic. Europe is in a particular bind, since it gets 40% of its gas and 25% of its oil from Russia.

Poland’s prime minister, Mateusz Morawiecki, described Russia under Putin as a "totalitarian-fascist state" and called for strong actions "that will finally break Putin’s war machine." "Would you negotiate with Hitler, with Stalin, with Pol Pot?" Morawiecki asked of Macron.

Russia withdrew many of its forces from the capital area in recent days after being thwarted in its bid to swiftly capture Kyiv.

It has instead poured troops and mercenaries into the country's east in a stepped-up bid to gain control of the Donbas, the largely Russian-speaking industrial region that includes Mariupol, which has seen some of the heaviest fighting and worst suffering of the war.

About two-thirds of the Russian troops around Kyiv have left and are either in Belarus or on their way there, probably getting more supplies and reinforcements, said a senior U.S. defense official who spoke on condition of anonymity to discuss an intelligence assessment.

Russian forces also appear to be repositioning artillery and troops to try to take the city of Izyum, which lies on a key route to the Donbas, the official said.

On Monday, Russian shelling killed 11 people in the southern city of Mykolaiv, regional governor Vitaliy Kim said in a video message on social media. Kim said nine of the victims died at a public transport stop in the city center.

"If we had already got what we needed — all these planes, tanks, artillery, anti-missile and anti-ship weapons — we could have saved thousands of people," he said.