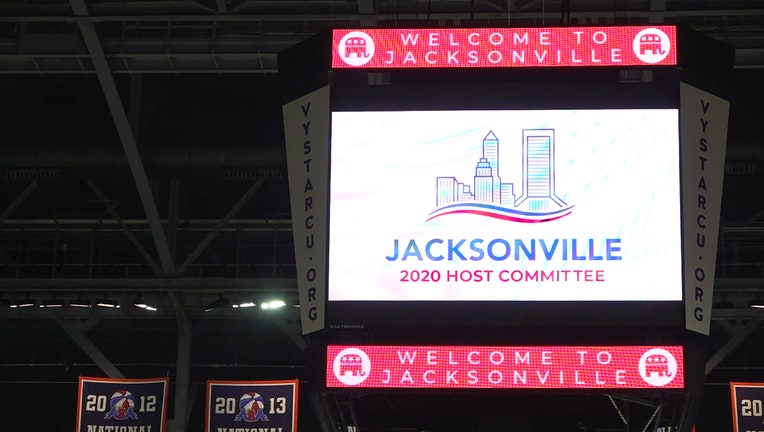 JACKSONVILLE, Fla. - Planning continues for the Republican National Convention next month in Jacksonville, the host committee announced late Monday after the local sheriff warned the city isn’t ready for even a scaled-down event.

“We continue to plan to host programming each day leading up to President Donald Trump’s speech accepting the nomination on Thursday, August 27th,” the host committee said in a news release. “We expect there to be evening programming each night, along with some daytime events and festivities.”

Most of the news release reiterated that the convention is being downsized because of the coronavirus pandemic, which the committee acknowledged Thursday. Florida has emerged as a global hotspot for the virus in recent weeks.

The news release came after Jacksonville Sheriff Mike Williams told reporters Monday afternoon he didn’t believe his agency could keep the convention safe with the short turnaround time after it was moved last month from Charlotte, N.C.

The Florida Times-Union reported Williams said only “bits and pieces” of a plan were set, with concerns about having resources that would extend from the convention to anticipated protests “outside the perimeter.”

RELATED: Jacksonville to host 2020 Republican National Convention after GOP pulls out of Charlotte

Williams, a Republican, added, “There’s got to be some major re-working of what’s happening.”

The host committee news release maintained the convention will be in Jacksonville, employing various health safety protocols for attendees, from Aug. 24 through Aug. 27.

“We plan to utilize a number of indoor and outdoor venues in this multi-block radius of Jacksonville, including the VyStar Veterans Memorial Arena, TIAA Bank Field, Daily’s Place Amphitheater, 121 Financial Ballpark and several others,” the host committee said.

Only regular delegates will be allowed to attend the first three days of the convention, while they will be able to bring guests to hear Trump publicly accept the party’s nomination. Alternate delegates will also get access to Trump’s speech.

“Trump is putting the Jacksonville community at risk by recklessly pushing forward with this last-minute convention despite the obvious health and safety concerns,” Florida Democratic Party spokeswoman Frances Swanson said in a statement.

Republican leaders last month decided to move key parts of the convention from Charlotte to Jacksonville after Trump expressed displeasure that North Carolina Gov. Roy Cooper, a Democrat, was "unable to guarantee" that coronavirus social-distancing requirements would be lifted before the event.

A University of North Florida poll of registered Duval County voters released June 24 found 58 percent opposed to the convention and 42 percent in support, with the views mostly split along party lines.

Meanwhile, 71-percent had concerns about the spread of COVID-19, the respiratory disease caused by the coronavirus, if a large number of people gathered for the convention, and 61 percent expressed some level of concern about protests and social unrest tied to the convention.