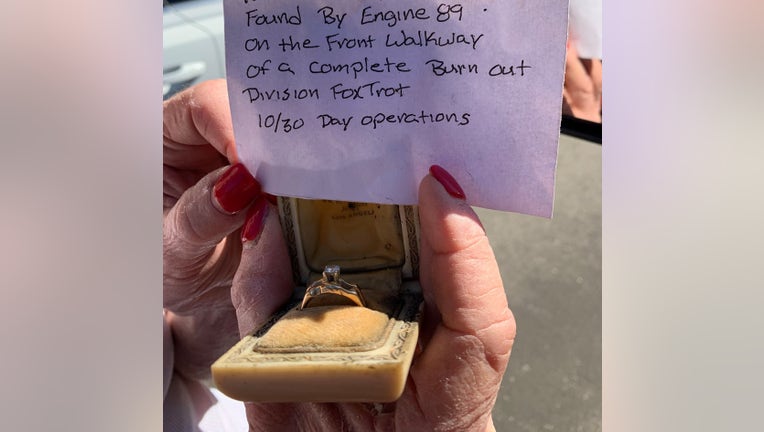 LOS ANGELES - Crews working the Getty Fire have salvaged a wedding ring from the rubble of a destroyed home -- nearly 58 years to the day since the same ring survived the 1961 Bel-Air Fire.

Last Wednesday, an engine company crew working on the Getty Fire "found a small ring box out in front of the only home destroyed in that section of the street," according to the Los Angeles Fire Department, which reported the ring box was "sitting there all by itself."

"When ... (crew members) opened it and saw the beautiful ring inside, they just knew this would be very important to the homeowner," according to an LAFD statement.

The firefighters took the ring to the incident command post and a few days later, after evacuated residents were allowed back into their homes, the owner was found and recounted the heirloom's history.

"That ring belonged to her mother who lived in the home when it was destroyed in 1961," according to the LAFD.

Mother and daughter were together at the home when they were ordered to evacuate last week, officials said.

"The resident was speechless and beyond happy to have the ringback," according to the fire department.