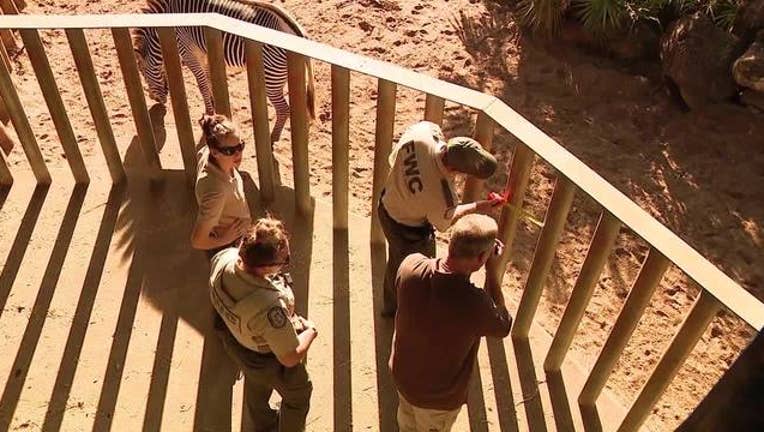 MELBOURNE, Fla. (AP) - A toddler who fell into a rhinoceros exhibit at a Florida zoo earlier this month suffered more extensive injuries than originally thought after being struck repeatedly.

On New Year's Day, a rhino encounter turned into a mad dash to save a child's life. A new report shows more details on how this happened. Zoo keepers and the girl's father says that the toddler lost her balance and fell between the metal posts, which are about eight inches apart.

However, when she fell, the report says that she startled two of the three rhinos. They began to strike her with their snouts repeatedly. This caused the child to be pushed into the steel posts multiple times.

The report goes on to say that girl's dad pulled her back up. His arm and her mother's arm were both pinned against the bars as they reached for their daughter.

RELATED: Toddler who fell into rhino enclosure released from hospital

A zookeeper says that the child was inside the enclosure for approximately ten seconds.

The Brevard Zoo initially thought the girl only had a bruise on her face, but when the toddler got to the hospital, the report says that there was a lot more going on. She had contusions to her chest, abdomen, back, and behind her right ear extending to the back of her head ,a bump on her forehead, a bruised lung, and a lacerated liver. She also had a bruised lung and lacerated liver.

The girl's mother suffered a severe bruise to her arm while trying to free the toddler.

The parents of the victim ask for privacy at this time.