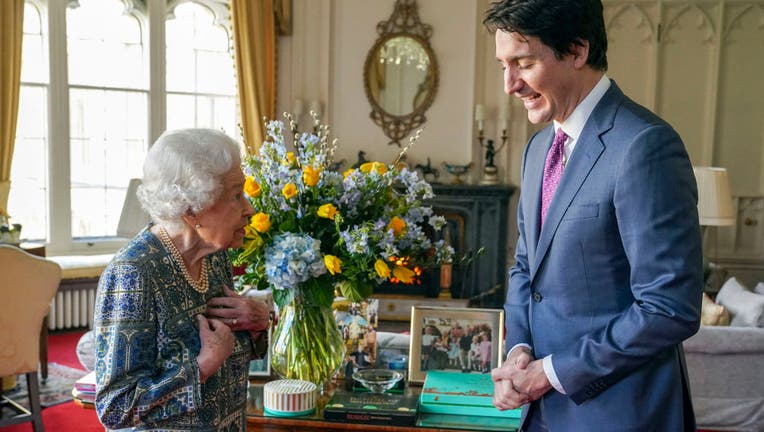 TORONTO (AP) - Canadian Prime Minister Justin Trudeau said Tuesday that Sept. 19 will be a holiday so that federal employees can mourn Queen Elizabeth II on the day of her state funeral.

Trudeau also said he's working with the provinces on a possible public holiday for other workers but Ontario and Quebec, Canada's two most populous provinces declined to make it a holiday.

"Ontario will mark September 19, 2022 as a provincial Day of Mourning in lieu of a provincial holiday. The people of Ontario may observe a moment of silence at 1:00 p.m. on that day," Ontario Premier Doug Ford said in a statement.

Quebec Premier François Legault told reporters Tuesday that Monday also would be a day of commemoration, but not a public holiday in the French-speaking province. Saskatchewan will also not recognize the day as a holiday.

However, the British Columbia government said it will follow the federal government’s lead. Provincial governments across Atlantic Canada have declared holidays including New Brunswick which will close schools and government offices. But the holiday will be optional for private-sector businesses and employers.

Manitoba will close all non-essential government services and offices for the day, but schools and child-care facilities will be open.

The late queen was the head of state for 45% of Canada’s existence and visited the country 22 times as monarch.

"Declaring an opportunity for Canadians to mourn on Monday is going to be important," Trudeau said. "For our part we will letting federal employees know that Monday will be a day of mourning where they will not work."

Canadian commemoration ceremonies on Monday include a parade, a fly-past and a church service in Ottawa that will be televised nationally.

King Charles III was officially proclaimed Canada’s monarch on Saturday in a ceremony in Ottawa attended by Trudeau and Governor General Mary Simon, who is the representative of the British monarch as head of state, a mostly ceremonial and symbolic position.

Though Canadians are somewhat indifferent to the monarchy, many had great affection for Elizabeth, whose silhouette marks their coins.

Overall, the antiroyal movement in Canada is minuscule, meaning that Charles will almost certainly remain the country's king. Abolishing the monarchy would mean changing the constitution. That’s an inherently risky undertaking, given how delicately it is engineered to unite a nation of 37 million that embraces English-speakers, French-speakers, Indigenous peoples and a constant flow of new immigrants.

Trudeau said Canadians are preoccupied with big issues like inflation and climate change and not constitutional issues.