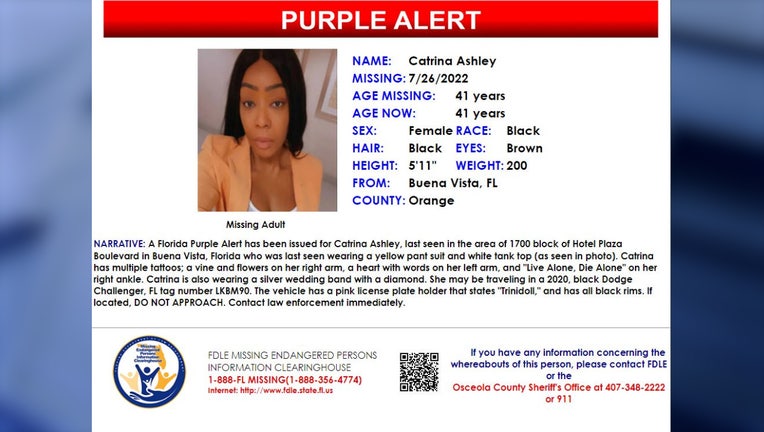 BUENA VISTA, Fla. - Authorities issued a Purple Alert for a Central Florida woman who was reported missing after she left her job early Tuesday and has not been seen or heard from since. Those alerts go out when an adult suffering from mental, cognitive, intellectual or developmental disabilities is missing, but does not meet criteria for a Silver Alert.

The Osceola County Sheriff's Office said Catrina Ashley, 41, was seen by her daughter leaving her home to go to work at the Hilton on Hotel Plaza Boulevard in Buena Vista at 7:30 a.m. Deputies said she arrived to work, but her co-workers said she left early.

Ashley was last seen wearing an orange pantsuit and a white tank top. She may be driving her back 2020 Dodge Challenger bearing the Florida tag LKBM90.

RELATED: Florida launches 'Purple Alert': What is it?

Law enforcement said she has not responded to phone calls and has not been seen since leaving her job at 1 p.m.

Ashley has multiple tattoos: a vine and flowers on her right arm, a heart with words on her left arm, and "Live Alone, Die Alone" on her right ankle, according to the Florida Department of Law Enforcement.

She may also be wearing a silver wedding band with a diamond.