Despite a rainy Thursday, hundreds of protesters assembled at Orlando City Hall to demonstrate for changes to police practices and call for reform nationwide following the death of George Floyd.

ORLANDO, Fla. - Protests over the death of George Floyd continue for another consecutive day despite a new curfew in portions of Downtown Orlando and intermittent showers.

On Wednesday, officials moved up the curfew in portions of Downtown Orlando to 8 p.m. in an effort to control crowds and disperse them earlier in the night. The rest of Orange County remained under a 10 p.m. to 5 a.m. curfew.

Protests on Wednesday were mostly peaceful once again as hundreds marched from the Orlando Police Department headquarters to City Hall.

Portions of Downtown Orlando now start their curfew at 8 p.m. 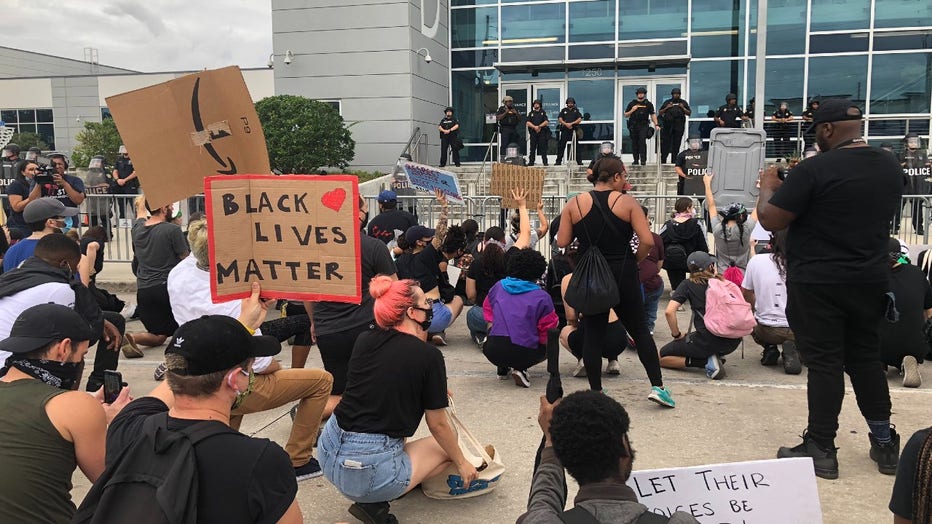 "It's definitely about joining the cause and not the chaos, per se, and still making sure that our voices are heard and we are unified in that," one protester told FOX 35 Orlando.

Another demonstrator said that they have "a lot of respect for police officers, but they really need to monitor their behavior."

When the curfew officially hit at 8 p.m., officers started clearing protesters from the streets. FOX 35 cameras showed most of the people left at this time and the streets were clear by 10 p.m.

There were still some arrests though. Police said that since the protests started, 88 people have been arrested. Some of the items found on the arrested protesters were a slingshot, a bag of rocks, and a gas mask. Officers also found three BB guns, three bats, and a hammer on those arrested near Millenia and International Drive area.

Few arrests made after curfew arrives at 8 p.m.

Downtown Orlando saw an earlier curfew on Wednesday night, beginning at 8 p.m. It was at that time that Orlando police officers began to clear protesters and they also made a few arrests.

Orlando Police believe the protests will continue throughout the week.

On Thursday morning, the University of Central Florida Police Department decided to stop its officers from further protests in Downtown Orlando.

RELATED: What will change when Florida enters phase 2 of reopening on Friday?

Phase two of reopening Florida will begin on Friday, allowing more businesses to open back up after the risk of COVID-19 shut them down in March. Bars, nightclubs, pubs, movie theaters, and concert venues will be able to operate at 50 percent capacity.

Phase 2 will allow even more businesses to open and even higher capacity limits.

Businesses throughout Downtown Orlando, a hot spot for bars, restaurants, and nightclubs, will soon reopen as a result and could be affected by the protests. Orlando Mayor Buddy Dyer said he will evaluate the curfew situation on a day-by-day basis.

Demonstrations are growing across the country as people demand justice in the name of George Floyd, who died last Monday after a Minneapolis police officer kneeled on his neck, holding him down for several minutes. All four officers involved in the incident are in custody and the former officer who kneeled on Floyd's neck, Derek Chauvin, is charged with second-degree murder without intent, third-degree murder, and second-degree manslaughter.

Building relationships in the community

God Is Able Outreach speaks to FOX 35 Orlando about building relationships in the community.