Protesters gathered at Lake Eola Park early Monday evening, a third night of demonstrations against the deadly arrest of George Floyd by a Minneapolis police officer.

ORLANDO, Fla. - Protesters in Orlando didn't stay in one spot for very long on Monday, traveling all over the city to make their voices heard.

"Because I could lose my family members at any moment and black lives matter. It shouldn’t be that way," said protester Nakiyah Paisley. "Upset, really. It’s beyond anger at this point. I’m upset because people shouldn’t be going through this."

RELATED: Trump warns governors he’ll deploy military across US to ‘solve the problem for them’ amid protests

On night three of protests in Downtown Orlando, protesters from Orlando police headquarters and City Hall joined forces and took a knee outside City Hall before marching over to Lake Eola. 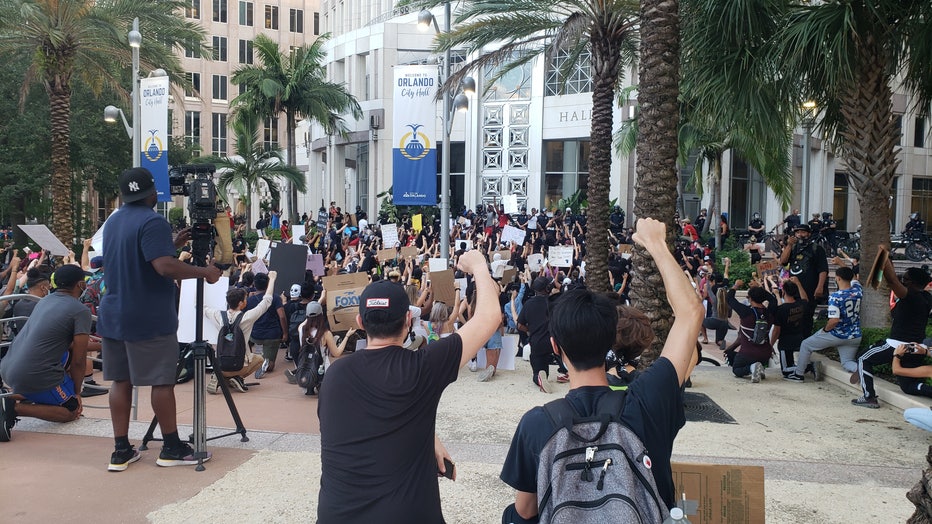 "Being here yesterday, being tear-gassed... It really motivates me to come back," Paisley said. "I feel like it’s my duty to walk with people now when they need that. It’s important to support our brothers and sisters and tell people that we’re all created equal."

Officers and deputies were on standby, managing traffic as protesters chanted hoping for change.

"It was so disheartening to see a man brutalized and murdered in daylight. And I just thought, 'Wow, this could literally be my brother," Paisley said.

A curfew remains in effect in Orange County from 10 p.m. to 5 a.m. until further notice.