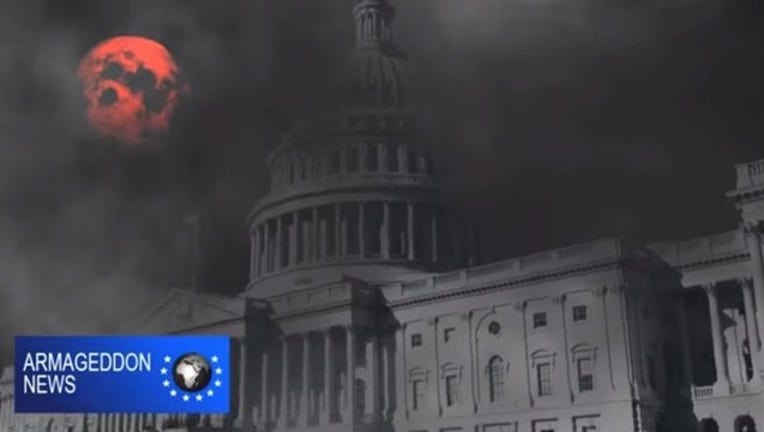 Depiction of the "end of the world" from the YouTube video from End times Prophesies.

The YouTube video has now attracted more than 6.5 million views as of August 1st, 2016. The group proclaims that the second coming of Jesus Christ will occur at the same time as the magnetic polar flip in a matter of minutes, which will cause a catastrophic global earthquake.

"The Earth will crack and shatter and split open," the video states, then goes on to explain more about the apocalypse through the voice of a woman speaking like a robot, along with simple animations and bible quotes.

Not that we want to spoil the ending of the video for you, BUT the last minute of the video ends with a promotion for a book and website.

According to NASA, polar flips happen many times over the millennia.  Reversals are the rule, not the exception.  Over the last 20 million years, the Earth has settled into a pattern of poles flipping about every 200,000 to 300,000 years, although it has been more than twice that long since the last time a reversal has occurred.  Earths' polarity is not constant, though. The Earth has a magnetic field because its solid iron core is surrounded by a fluid ocean of hot, liquid metal.

When referring to this 'end of times' theory, NASA says a magnetic pole reversal might be good business for magnetic compass manufacturers.