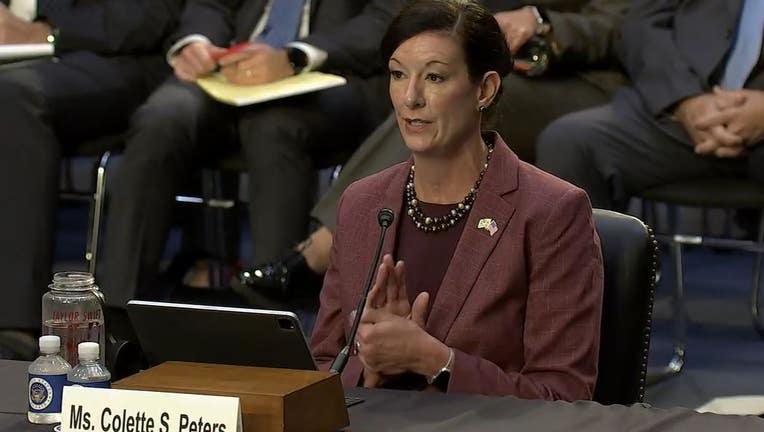 WASHINGTON - Under questioning by U.S. senators on Thursday, the new director of the Bureau of Prisons promised to make changes at the beleaguered federal prison system, including at FCI Dublin, where five officers have been charged with sex crimes and incarcerated women and whistleblowers report being retaliated against for reporting any wrongdoing.

BOP Director Colette Peters told the politicians at a Senate Hearing on the Oversight of the Federal Bureau of Prisons that she has already visited the Dublin prison within the first two weeks of her talking helm.

While there, she conducted a "cultural assessment" of the facility to figure out what is happening there to make people uncomfortable to speak up about sexual assaults and illegal sexual relationships.

Over the course of eight months, KTVU has communicated with nearly 40 women, all of whom have suffered sexual abuse at the prison, witnessed the abuse, and then were sent to solitary confinement or sent away to another prison after speaking up.

One former correctional officer, Tess Korth, said she was reassigned after reporting abuses to her superiors, and instead of moving to Oregon, she retired, telling management to "shove it."

Peters was not specific about any of her vows to change the culture at FCI Dublin.

But she did tell the senators, including Sen. Dianne Feinstein (D-California) and chair Dick Durbin (D-Illinois) that she has "great confidence" in the new warden, Thahesha Jusino.

Both Peters and Jusino have declined multiple interview requests with KTVU.

Korth does not have this confidence in Jusino, telling KTVU that she thought that the same problems have persisted under her leadership.

Still, Peters said that she's already made a few reforms, including reorganizing the Internal Affairs division at the prisons, including hiring 40 more employees and investigators to get rid of the backlog of complaints and redirecting those allegations straight to the BOP.

"I want no surprises," Peters told the senators. "Headquarters needs to know when things aren't working."

She also said the agency is making sure workers are trained in gender responsiveness and trauma-informed care at FCI Dublin.

Peters’ testimony before the Senate Judiciary Committee — the first time she’s appeared before Congress — was a stark departure from the combative nature of her predecessor, who drew bipartisan rebukes for foisting blame on others and refusing to accept responsibility for the agency’s problems.

Peters, who started in August, said the troubles she inherited have eroded trust in the agency among staff, inmates and the public. She cautioned that it’ll take time to turn around the Justice Department’s largest component, with 122 facilities, 159,000 inmates and a budget of more than $8 billion — but that it must be done.

Peters agreed without hesitation when Sen. Jon Ossoff, D-Ga., asked if "the buck will stop with you" and if she will bear "personal and ultimate responsibility for what happens" at the agency.