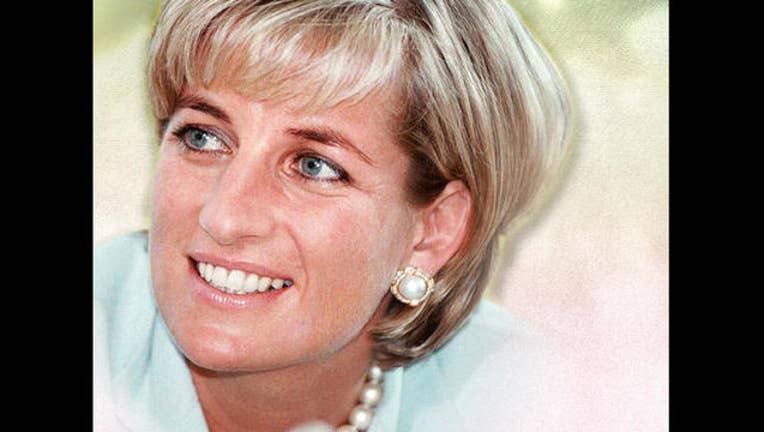 Diana, the Princess of Wales during her visit to Leicester in this May 27, 1997 file photo, to formally open The Richard Attenborough Centre for Disability and Arts. The Princess was killed in a car crash in Paris Sunday August 31, 1997, along with h

LONDON (AP) - The shock came late on a summer evening: After an idyllic Mediterranean holiday, Princess Diana had been in a car crash in Paris. Her boyfriend was dead; she was hospitalized, condition unclear.

She died a few hours later on Aug. 31, 1997, plunging Britain into grief that lingers to this day. Twenty years later, the memory of Diana - a youthful mother cut down, leaving two children behind - remains vital, her influence still felt.

Time has blurred the memories, but people around the world still remember Diana as a young bride, so taken with Prince Charles, and as a glamorous trendsetter dancing at the White House with John Travolta. She was the fun-loving mom taking her two boys on amusement park rides, and the tireless charity worker who reached out to AIDS patients when they were shunned by much of society.

The sons Diana left behind - Prince William, now 35, and Prince Harry, 32 - are playing increasingly important roles in Britain's national life as the public focuses on the next generation of royals, sometimes at the expense of William and Harry's father, Prince Charles.

"Her essential legacy is her children and the fact is that they have become known more as her children than as his, in the sense that the charity work they are doing resonates with what she was doing - difficult issues like mental health, just like she took on AIDS," Diana biographer Andrew Morton said. "So she has a living legacy."

Morton's 1992 book about Diana revealed the depth of her despair: her struggle with a serious eating disorder, attempts at self-harm, and what he calls the "deep unhappiness" of her union with Charles, which ended in a bitter divorce in 1996.

It was supposed to be so different. Charles was heir to the throne, and Diana's entry into the royal family meant she was likely to become queen one day.

Theirs was perhaps a common story of infidelity and broken vows, but played out on an uncommonly public stage. Each used TV interviews and books by favored authors as megaphones in their bids for public sympathy.

Charles, with his somewhat stiff demeanor and unapproachable public persona, could never compete with Diana's doe-eyed appeal, especially when she famously complained there had always been "three people in this marriage" - an arch reference to Camilla Parker Bowles, who would marry Charles eight years after Diana's sudden death.

Many saw Diana as a young mother wronged by a privileged older husband's refusal to give up his lifelong mistress - even though the princess admitted to affairs of her own.

Refusing to fit the Windsor mold, she sought new ways to cope with fabulous wealth, worldwide fame, and sky-high expectations. She reached out and actually touched AIDS patients - a taboo at the time - and travelled to former combat zones to highlight the dangers land mines posed to civilians.

Many felt they could relate to her when she recounted her own battles with bulimia and talked openly of her disappointment and loneliness.

Some remember her for bringing a refreshing informality to the royal family - for example, taking young William and Harry in 1993 to Thorpe Park, a popular amusement center near London where they squealed and screamed along with everyone else on the water rides.

Carol Meredith, a nurse who recently visited the Princess Diana Memorial Fountain in Hyde Park with her husband, said that in the past senior royals would have had the amusement park cleared so they could enjoy it without mingling with the public.

"Diana changed that," she said. "When she used to take her kids to Thorpe Park, she enjoyed being with everybody else and doing the same as everybody else. She changed what you think of the royal family."

Meredith's husband, Andrew, said Diana was different from other royals.

The difference between the two approaches - and the depth of the public's affection for Diana - crystallized in the days after her death, when tens of thousands of mourners paid tribute to Diana by placing flowers outside London's Kensington Palace, where she had lived.

Queen Elizabeth II was on vacation in Scotland at the time of the accident, and she remained there for several days. She declined to lower the flag atop Buckingham Palace to half-staff, citing protocol, as rare public anger mounted against the monarch.

Elizabeth seemed, publicly at least, unmoved by Diana's death, even as the prime minister - media-savvy Tony Blair - coined a memorable phrase in describing Diana as "the people's princess."

The queen eventually relented and came to London to pay her respects. The royal family then took steps to regain public favor, in part by adopting the more people-friendly approach Diana had used.

"She still obviously has a strong image in the British psyche," Dyson said, adding that Diana's accessible approach brought her closer to the British people than other royals.

"People felt they could identify with her," Dyson said, remembering the impact of Diana's charitable endeavors, including visits to hospitals and homeless shelters. "She was doing good work."