President Donald Trump campaigned in Central Florida after testing negative for the coronavirus.

SANFORD, Fla. - President Donald Trump arrived in Sanford on Monday, just days after a doctor said he is no longer at risk of transmitting the coronavirus.

On Monday, it was revealed the president tested negative for coronavirus.

Navy Cmdr. Dr. Sean Conley on Saturday said that President Trump meets the Centers for Disease Control and Prevention (CDC) criteria for safely discontinuing isolation and that by “currently recognized standards” he is no longer considered a transmission risk.

The president was forced to cancel the Sanford event last week after testing positive for COVID-19.

FOX 35 reporter Vicki Karr was outside of the Sanford airport on Monday and saw people lined up for the rally as early as 5 a.m.

This will be his first rally back since being diagnosed with coronavirus last week.

One Trump supporter on Twitter even said that she lined up on Sunday night for the rally.

The president revealed that he had tested positive for the coronavirus last week. He was then taken to Walter Reed National Military Medical Center on Oct. 2 but returned to the White House on Oct. 5 after receiving aggressive treatment, including an antibody cocktail.

He made his first public appearance on Saturday, as hundreds gathered to hear him speak about his support for law enforcement from a White House balcony.

During the event, President Trump said, “I’m feeling great,” and was thankful for the good wishes and prayers he received as he recovered. 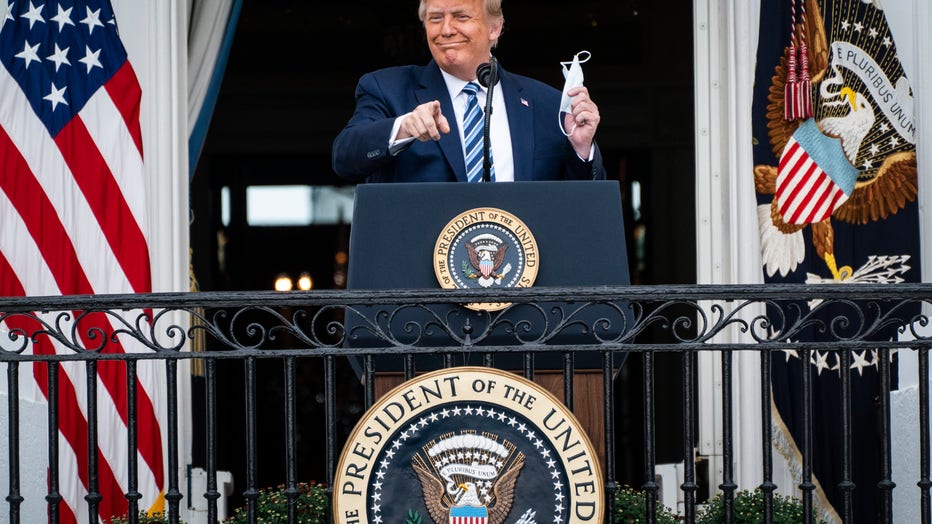 The CDC said that, generally, people with COVID-19 are no longer likely to spread the infection 10 days after having symptoms or a positive test result. Isolation and precautions can stop after 10 days.

Seminole County Medical Director Todd Husky told FOX 35 that the treatment the president received helped, explaining that, "What he got, the anti-virals, the Remdesivir, and the monoclonal antibodies helped you kicked the virus' butt -- help it go away faster. So, it probably did help him clear the virus much faster."

However, Dr. Husky still warned that those in attendance should wear masks and social distance to avoid getting COVID-19, stating the risk of transmission is high.

On Monday, President Trump is making a campaign stop at the Orlando-Sanford International Airport.

Monday’s rally comes a little more than three weeks before the election. Sanford is in Central Florida’s I-4 corridor, which is typically a fiercely contested region of the state.

RELATED: Joe Biden to visit Florida this week, will push Floridians to vote

"President Trump comes to Sanford today bringing nothing but reckless behavior, divisive rhetoric, and fear mongering. But, equally dangerous is what he fails to bring: no plan to get this virus that has taken the lives of over 15,000 Floridians under control, no plan to protect Floridians’ health care amid his attacks against the ACA, and certainly no plan to mitigate the economic impact the pandemic is having on families across Central Florida. Donald Trump won’t speak to the pain being felt by working families. The best he has mustered is, “it is what it is.” Well, it is what it is because he is who he is.

"I’ve helped this country recover before, and my commitment to all Floridians is to build this country back better. As President, I will deliver a swift, inclusive economic recovery that includes historic investments in small businesses, gives working families the tax relief they deserve, and creates millions of new, good-paying jobs."

Women for Biden also gathered in Central Florida on Monday, ahead of Trump's arrival.

Women for Biden gather ahead of Trump’s Sanford rally