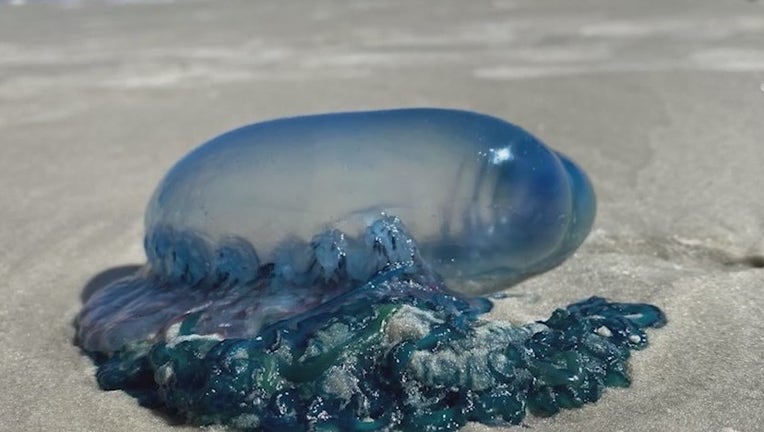 DAYTONA BEACH, Fla. - Volusia County Beach Safety flew the red and purple flags over the weekend. They said dangerous rip currents are out in the water this week as well as Portuguese man o' war that are washing into the shoreline.

Beach patrol rescued eight people from the ocean Friday, and none of them were seriously hurt. They're expecting a high rip current risk all weekend with rough surf. They're also warning about dangerous wildlife in the water.

Along with the man o' war washing up on the beach, they also had lots of little splinter-like shells washing up. These are from ocean snails that are also called "sea butterflies" that can stick into your skin like needles. They're non-toxic, but definitely, something for people on the sand today to watch out for. The man o' war also has a dangerous sting.

"The tentacles are a very dark purple or dark blue," said Volusia County Beach Patrol Capt. Laura Warner, "the more colorful the man o' war is the more dangerous it is. All man o' war have a very potent sting. Our lifeguards do carry vinegar to treat any stings that we have. The tentacles would have to be removed if they are stuck to the skin."

As always, the number one rule remains to always swim in front of a lifeguard.

According to the school of Ocean and Earth Science and Technology at the University of Hawaii, the best thing to do if stung by a man o’ war is to rinse the sting with vinegar, remove any tentacles, and put hot water or a hot pack on the sting for 45 minutes.

The good news is they're rarely deadly to humans, but you still want to avoid them.