Polk County Sheriff Grady Judd on Friday identified a man who was shot during a child custody exchange as a suspect and not a victim. Judd said the father of a nearly two-year-old boy who was fatally shot by his ex-girlfriend's current boyfriend was the aggressor in this incident and killed in an act of self-defense.

LAKELAND, Fla. - A father picking up his child gets gunned down. The Polk County Sheriff says the gunman doesn't appear to be at fault and that the mom's boyfriend was standing his ground. Sheriff Grady Judd says the father had problems with anger management and it got him killed.

It was a child custody excahnge gone wrong. Surveillance video shows the moments Brian Ingram tried to pick up his nearly two-year-old son from his ex in Lakeland Thursday. The video shows Ingram banging at the door, ringing the bell and covering the peephole. His ex wasn't home, but her boyfriend was.

The Sheriff says she wanted to wait to exchange their son until she arrived, but Ingram wouldn't have it. Ingram's mother was with him and witnesssed the incident.

"She admits she hears the victim telling him to get out of the house, to leave, to leave, you don’t have any right to be here," said Sheriff Judd.

That's when the video show Ingram trying to force his way inside, pushing the boyfriend and hitting him with a door. Sheriff Judd says the boyfriend shot him fives times. Ingram tried to run away, then collapsed and died.

Sheriff Judd says Ingram had a criminal history, a history of anger management issues, appeared to ahve been drinking and already had an injunction against him.

During a news conference on Friday, Polk County Sheriff Grady Judd identified the child's father, 39-year-old Brian Ingram, of Gainesville, as the suspect in this case and the homeowner as the victim.  Judd did not name the homeowner, adding that he is not facing any charges at this time.

"We don't get to decide if this is a justifiable homicide," said Judd, "but everything we see at this end of the investigation clearly indicated that he [the victim] was protecting his home."

The incident began earlier in the day when Ingram and his mother, Patricia, drove from Gainesville to Lakeland to retrieve Ingram’s son, through a custody agreement between Ingram and his ex-girlfriend.  Patricia knocked on the door and asked for the little boy, at which time the victim invited her to wait until the boy’s mother returned from the store so she could say goodbye before he left for the weekend. Ingram then called 911 and told the call taker that the victim was refusing to let him have his 2-year-old son, and the call-taker told Ingram to wait on-scene for deputies to arrive and assist. 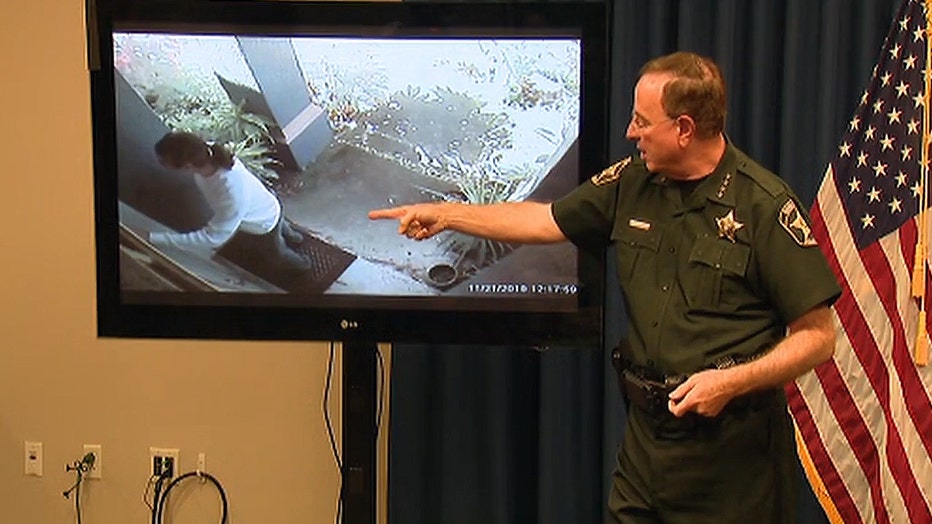 "I want to underscore here, Brian Ingram, our suspect, has a long history of anger management problems," Judd told reporters.

Investigators said the homeowner warned Ingram to leave or he would be shot. Judd said Ingram continued to force his way into the home and was shot five times by the homeowner. Ingram ran into the yard where he collapsed and succumbed to his injuries.

No one else was seriously hurt.

"This domestic event, when you add his anger management issues with it, ended up in his death," he said.

Ingram’s criminal history includes two prior felonies and six prior misdemeanors in Suwanee and Alachua Counties, for aggravated assault with a deadly weapon, battery, DUI, possession of a controlled substance, possession of marijuana, and resisting arrest.