Police officers entice coyote out of kitchen with dog toys

Police officers in Spartanburg, South Carolina, were called March 19 to help lure a coyote out of a woman's kitchen. Credit - Spartanburg Police Department via Storyful

SPARTANBURG, S.C. - After a coyote wandered into a home in South Carolina, responding police officers had to think creatively in order to lure the animal out of the resident’s kitchen.

Officers were called March 19 to a home in Spartanburg, located about 75 miles west of Charlotte, after a woman found the surprise guest in her home.

"One of my dogs came through here, and he started barking and looking all over, like there was a mouse or something," Sandie Ferguson told local news station WSPA-TV.

Ferguson said the coyote came through a dog flap in her door and hid in the corner of the kitchen.

"When I first saw him, I thought ‘It’s a coyote. Then I thought, ‘No, it has to be a dog.’ But he didn’t move, he didn’t bark, he didn’t growl or whimper," she told the station. 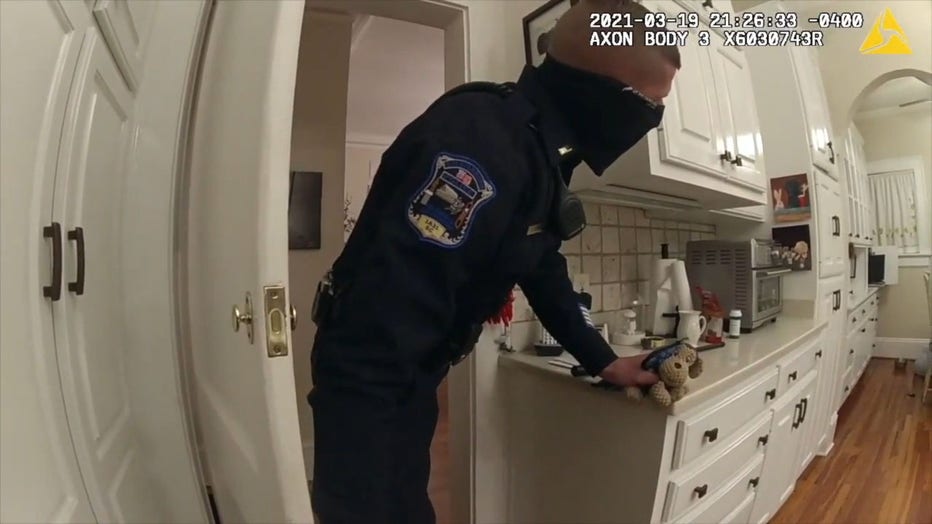 That’s when Ferguson called 911. She said the animal stayed in the corner until police arrived.

Video released by the Spartanburg Police Department shows officers using dog toys to try and coax the coyote out from behind a table.

The animal, which stayed frozen "like a statue" for over an hour, eventually left the same way it came in.

"See how officers respond to COYOTE call for service. This is just some of the challenges the men and women of the Spartanburg Police Department face daily," the department wrote on Facebook. "Great work Lieutenant Metz and Officer Cote."

Coyotes, which average about 35 pounds but can exceed 50 pounds, rarely attack humans, according to the Humane Society. But they have been known to prey on livestock such as chickens and lambs, as well as cats and dogs.

Coyotes first appeared in South Carolina’s upstate region in 1978, but are now present in all of the state’s 46 counties, according to the South Carolina Department of Natural Resources.

The department said their appearance is due to people illegally importing them for hound running. Eastern migration of coyotes has also resulted in the species’ natural expansion across the state.

RELATED: Coyote euthanized after it was rescued from water at Port of Miami