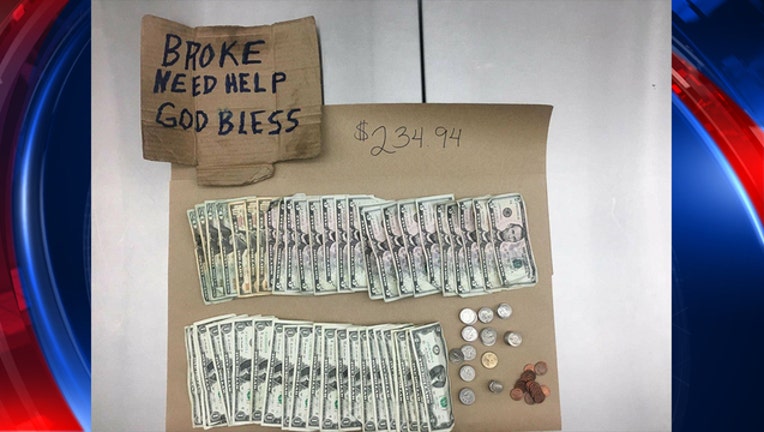 CHEYENNE, Wy. - A police department in Wyoming caused an online controversy after a social media post that was meant to discourage people from handing over money to panhandlers.

The photo, posted to Facebook by the Cheyenne Police Department, showed a sign that read 'BROKE PLEASE HELP GOD BLESS' accompanied by over $230 in cash they say a transient person had on them when they were arrested for public intoxication earlier this week.

"This is a person we frequently deal with, but we want to illustrate that there are better ways to help the transient population than to give them money for panhandling," the police department's post said.

“This person collected $234.94 in just a few hours of asking for money. Rather than feeding someone's alcohol addiction, you can donate directly to local charities such as the Comea Shelter where your money will assist the homeless in a much more effective way.”

The police department's post sparked over 7,000 comments - some in support of the police and some against.

"Public shaming, nice. Cheyenne Police Department should be ashamed of themselves. What they do with their money is none of your business and Addiction isn't a punchline in a Facebook post. Awful," wrote one person.

A supporter posted, "Great job Cheyenne PD! This individual could easily have been robbed or injured in his impaired state. It's possible you saved his life and gave him at least a few hours of safety and care. I agree 100% with your actions. There are far better options for people to donate their money. Veterans organizations and battered women's shelters, for example. Thanks for all you do to serve your community.”

Later in the week, the police department followed up with a second post clarifying their position on the matter.