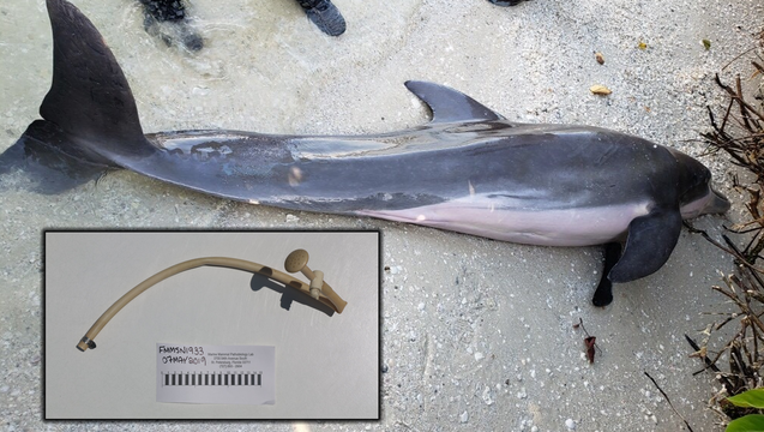 FORT MYERS, Fla. (FOX 35 ORLANDO) - Another dead dolphin was found stranded in Florida with plastic in its stomach.

The Florida Fish and Wildlife Conservation Commission (FWC) posted on Facebook that last week, FWC biologists from their southwest field necropsied a seven-foot male dolphin that was recovered from Fort Myers Beach in Big Carlos Pass. During the necropsy, they found a 24-inch plastic shower hose in the esophagus and forestomach of the dolphin.

They said that this is the second stranded dolphin in one month's time from this region that had ingested plastic. The first was found in April with a stomach full of plastic trash bags and a shredded balloon.

FWC said that people shoud look closely at their habits, as your actions can make a difference. They advised that you secure and properly dispose of trash, take part in coastal cleanups, and share information on how to reduce marine debris with others.

Please call the FWC's Wildlife Alert at 888-404-3922 if you see a stranded animal. Marine mammals often strand for a reason, such as being sick or injured. They advise that you do not push the animal back into the water, as it can delay examination and treatment. The animals then often get stranded again butin worse condition.