Moments of empathy, compassion and unity across the United States

Beautiful moments of empathy, compassion and unity have been seen across the United States.

LOS ANGELES - Two very different stories can be told about what happened over the weekend in Los Angeles and across the nation. One demonstrates solidarity among people of all races, doing whatever they can to make sure that the message isn't lost in translation: black individuals are not being treated as first-class citizens in the United States and the death of George Floyd can't be another statistic. The other attempts to distract from that message by whatever means possible in hopes of capitalizing on a divided nation in order to shatter our dreams of unity.

George Floyd, 46, died on May 25 and video later emerged showing him on the ground with a Minneapolis police officer pressing his knee against his neck. Footage released of the incident showed Floyd shouting, “I cannot breathe” and “don’t kill me.”

That officer and three others with the Minneapolis Police Department were fired by the department on May 26. The officer who knelt on Floyd's neck was charged on May 29 with third-degree murder and second-degree manslaughter. The three other officers have not been charged in his death.

Disgust over generations of racism in a country founded by slaveholders combined with a string of recent racially charged killings to stoke the anger. Adding to that was angst from months of lockdowns brought on by the coronavirus pandemic, which has disproportionately hurt communities of color, not only in terms of infections but in job losses and economic stress.

"The black community is not responsible for what's happening in this country. We are," California Governor Gavin Newsom said as he addressed his state Monday afternoon.

Newsom discusses death of George Floyd and unrest across the nation

“Maybe this country will get the memo that we are sick of police murdering unarmed black men,” said Lex Scott, founder of Black Lives Matter Utah. “Maybe the next time a white police officer decides to pull the trigger, he will picture cities burning.”

"The protests are not about 'not being heard,'" explained FOX 11 employee, Tshaka Armstrong. "They're about a real, or perceived, lack of justice for crimes against humanity, specifically targeting people of color. They're about the hopelessness and frustration which comes from feeling like you have no redress or resolution for being preyed on for hundreds of years. The frustration that the same or similar scenario took place with their great great grandparents. Their great grandparents. Their parents. And now them."

What is happening across America today can best be understood through the eyes of those who have to deal with racism and inequality on a daily basis. Through the eyes of a mother who has to teach her young son to act a certain way because his actions will be perceived differently because of the color of his skin, in order to keep him safe. Through the eyes of a young girl who grew up being often defined by her skin color, referred to as the "black friend" instead of being seen for who she is.

Over the past few weeks, society has witnessed first-hand two African-American deaths at the hands of white men with no regard for the value of human life in the process.

The death of Ahmaud Arbery is still a fresh wound for people of color. Arbery, 25, was shot and killed on February 23, 2020, while on an afternoon jog after being pursued by armed white men through the suburban neighborhood where he lived outside Brunswick. No charges were filed until video of the killing circulated widely on social media more than three months later. The way the case was handled caused many to question why charges weren't filed until after a nationwide outcry and if the system holds any accountability when black men are killed by white individuals.

In that case, a third man, who filmed the murder of Arbery, was later charged with felony murder. Which begs the question, why was the officer involved in Floyd's death not facing more-severe murder charges? Why are the other three officers not facing charges? Is the system protecting them?

"Mr. Floyd died in our hands and so I see that as being complicit," he said. "Silence and inaction, you're complicit. If there was one solitary voice that would have intervened ... that's what I would have hoped for."

Recent killings highlight the fact that society seems to have a disregard for the preservation of human life, primarily when it involves individuals of color.

For those of color, they say enough is enough - that their lives must be valued, and that the system needs to be altered because they believe it's not designed to protect them.

"It's needed," protestor Antonio Singleton told FOX 11. "The looting is not ideal, but we have to get a point across. Unfortunately, buildings can be rebuilt, property can be rebought, but lives can't be brought back. Right now, everybody's hurting. There are some people taking advantage of it — but at the end of the day, there's people taking advantage of other people's lives."

"This incident doesn’t make all cops bad and it doesn’t make you anti-police if you're outraged over this," said Tampa Police Chief Brian Dugan. "Wanting cops to be held accountable doesn’t mean you don’t support the police."

Although a few protesters condone the looting, most condemned it.

"This is so sad. Yeah, you can protest, but when you have to break into other people's businesses and destroy everything... I just don't get it," one protester told FOX 11. "It's really sad. People worked too hard to do this."

A woman told FOX 11 she does not believe looting is the way to get the message across amid unrest in Long Beach.

Additionally, many government officials both locally and nationwide have continued to clarify the difference between protesters and looters, saying that the latter came with the intent of capitalizing on the large crowds and fragile state of the nation from the coronavirus pandemic for personal gain.

And while the country may feel incredibly divided, this weekend we saw unity and compassion like never before.

People of all races came together Saturday during a peaceful protest in Los Angeles taking a knee and raising a fist in honor of Floyd as the song "I Believe" by Micah Stampley was broadcasted to the crowd.

As looting took place in Santa Monica Sunday, a couple of protesters put their lives in danger by standing in front of the REI store to stop others from ransacking. They wanted to make sure the reason behind their protests wasn't forgotten.

"This is about George Floyd. This is not about selfish gain," one of the protesters told FOX 11. "This is about all the suffering we have been put through. People of color. That we don't have anything and the system — it doesn't work. But we can't take it out on other people. These local businesses had nothing to do with this."

"We're here for the protests but when we see people looting, it defeats the cause," the other protester added. "We don't want our cause to be lost."

In Long Beach Monday morning, members of the National Guard helped community members clean up their city Monday morning following an evening of unrest in the Southern California coastal city. 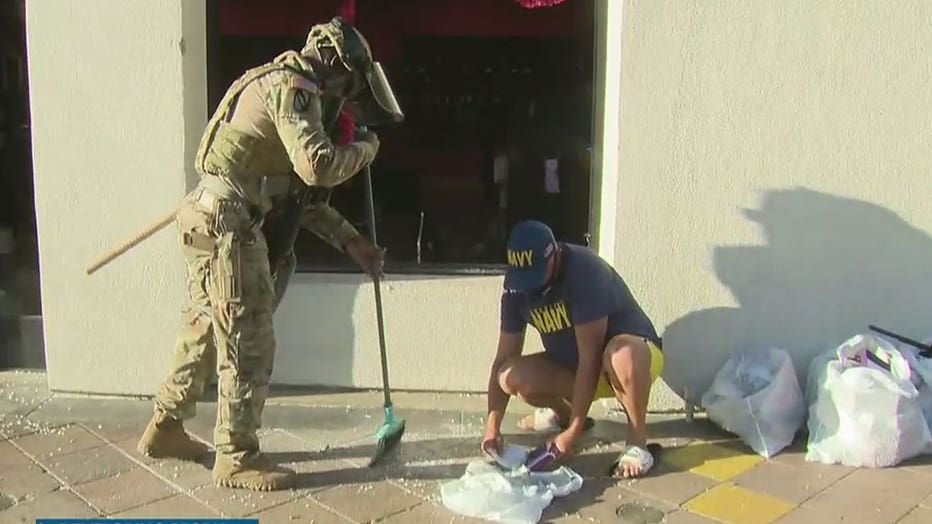 A Long Beach resident who attended the protest told FOX 11, "the National Guard had nothing to do with this and they're cleaning up the glass and the mess."

The comradery between the residents and members of the National Guard provided some hope for humanity during a time of so much pain and anger.