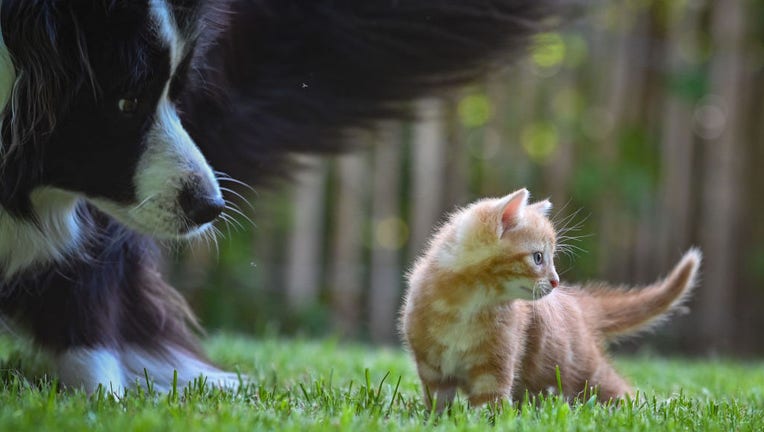 FILE - A kitten about seven weeks old explores a garden next to a border collie in a meadow. Photo: Patrick Pleul/dpa-Zentralbild/ZB (Photo by Patrick Pleul/picture alliance via Getty Images)

ANN ARBOR, Mich. - Owning a pet, particularly five years or longer, may help keep individuals sharper as they age, according to preliminary findings from a new study.

Cognitive health, or the ability to clearly think, learn and remember, is an important component of completing everyday tasks — though experts say some mild changes in cognition are considered a normal part of aging.

"Prior studies have suggested that the human-animal bond may have health benefits like decreasing blood pressure and stress," Dr. Tiffany Braley, a study author from the University of Michigan Medical Center and a member of the American Academy of Neurology, said in a statement. "Our results suggest pet ownership may also be protective against cognitive decline."

In the new study, researchers analyzed cognitive data from 1,369 older U.S. adults with an average age of 65 and listed as having normal cognitive skills at the start of the study. A total of 53% owned pets, while 32% were long-term pet owners, which was defined as those who owned pets for five years or more.

The data was pulled from a large study of Medicare beneficiaries, called the Health and Retirement Study, in which people were given multiple cognitive tests involving things like subtraction, numeric counting and word recall. Researchers used those tests to develop a composite cognitive score for each person, ranging from zero to 27.

Researchers from the Michigan Medicine's Sleep Disorders Center made the discovery.

Looking at data over six years, the study found that cognitive scores decreased at a slower rate in pet owners and the difference was the strongest among long-term pet owners. Taking into account other factors known to affect memory and other cognitive functions, Braley’s team also found that the cognitive benefits associated with longer pet ownership were stronger for Black adults, college-educated adults and men.

However, the team said more research is needed to better explore possible reasons for these associations.

"As stress can negatively affect cognitive function, the potential stress-buffering effects of pet ownership could provide a plausible reason for our findings," Braley said.

"A companion animal can also increase physical activity, which could benefit cognitive health. That said, more research is needed to confirm our results and identify underlying mechanisms for this association," the study author added.

The findings will be presented at the American Academy of Neurology's 74th Annual Meeting in Seattle, scheduled between April 2 to 7, 2022 and virtually from April 24 to 26.