Will Smith slaps Chris Rock over joke at Oscars

A 94th Academy Awards that steadily maintained a buoyant spirit was rocked by an unbelievable exchange after Will Smith took offense to a joke made by Chris Rock about his wife, Jada Pinkett Smith.

LOS ANGELES - The world watched in shock on Sunday night during the Oscars after actor Will Smith walked on stage and smacked comedian Chris Rock for making a joke about his wife, Jada Pinkett Smith.

But once Smith returned moments later to accept his first-ever Academy Award, he delivered a tearful apology for an act sure to overshadow his milestone achievement. He seized the opportunity during Sunday night’s awards to speak on being a fierce defender just like his tennis dad character Richard Williams from "King Richard."

Smith felt like the protector of many including his wife, Jada Pinkett Smith, after Rock made a joke about her appearance that didn’t sit right with him. 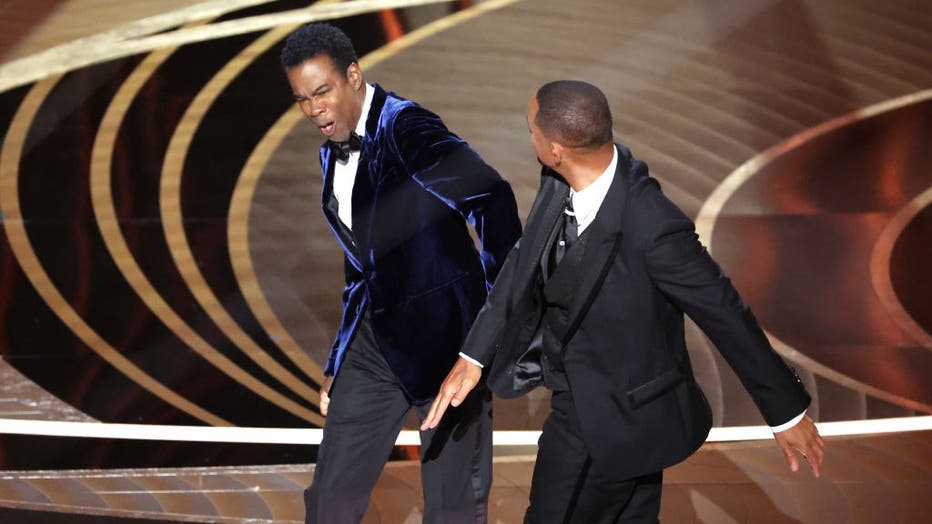 HOLLYWOOD, CA - March 27, 2022. Chris Rock and Will Smith onstage during the show at the 94th Academy Awards at the Dolby Theatre at Ovation Hollywood on Sunday, March 27, 2022. (Myung Chun / Los Angeles Times via Getty Images)

"Richard Williams was a fierce defender of his family," Smith said as he began his acceptance speech after winning best actor honors. He apologized afterward to many people — including tennis stars Venus and Serena Williams, Richard Williams’ daughters — but did not mention Rock in his apology.

Smith then spoke about being a protector for those who worked with him on the film such as Aunjanue Ellis along with Saniyya Sidney and Demi Singleton, the two actors who played Venus and Serena.

Smith shared what Washington told him: "At your highest moment, be careful because that’s when the devil comes for you.

A representative for Rock didn’t immediately respond to an email seeking comment.

"That was the greatest night in the history of television," Rock said before resuming his role as presenter.

A few minutes later, rapper Sean Combs — on stage to introduce a tribute to "The Godfather" — tried to play peacemaker and suggested Smith and Rock settle their differences at an Oscars afterparty.

"Will and Chris, we’re going to solve that like family at the Gold party," Combs said.

The reverberations did not stop there. Several people approached Smith and Pinkett Smith in the commercial breaks that followed; Keith Urban hugged Smith during one stoppage in the show, and Nicole Kidman also went over to say a few words as well.

Backstage, during interview sessions with winners, the Rock-Smith incident seemed like something few — if anyone — wanted to discuss.

"I’m not talking about that," said Ahmir "Questlove" Thompson, the director of "Summer of Soul," which won an Oscar for best documentary.

"I think we have to sometimes remember, like at a certain point, everyone breaks," said TV personality Karamo Brown. "But I think these are two men that will actually come together, figure it out and like say ‘OK, enough is enough, I’m sorry.’ ... I haven’t been in that situation. I never condone violence or anything of that nature, but I also could understand protecting those you love."