What's in store for Downtown Orlando's Creative Village development? FOX 35 News takes a closer look at the longterm plans for the district, which is presently home to the downtown campuses for the Univerity of Central Florida and Valencia College.

ORLANDO, Fla. - A downtown within Downtown Orlando.  The City of Orlando's Creative Village is expected to develop into an eye-catching area, where people learn, work, live and play — but most importantly where creative minds interact. The University of Central Florida and Valencia College campuses were just the beginning.

“That was the spark that we needed and you can see other development has come,” said Thomas Chatmon Jr., executive director of the Downtown Development Board in the City of Orlando.

The 68-acre district, northeast of Orlando’s city center, is all planned.

More housing is under construction, a new mid-rise apartment building is about to break ground and EA Sports’ regional headquarters is coming soon.

“We think that’s going to be the catalyst for additional jobs that are related to the digital media industry,” Chatmon said.

A hotel and plenty of ground-floor retail are in the plans as well.  The district is all situated around a large central park, welcoming to all. 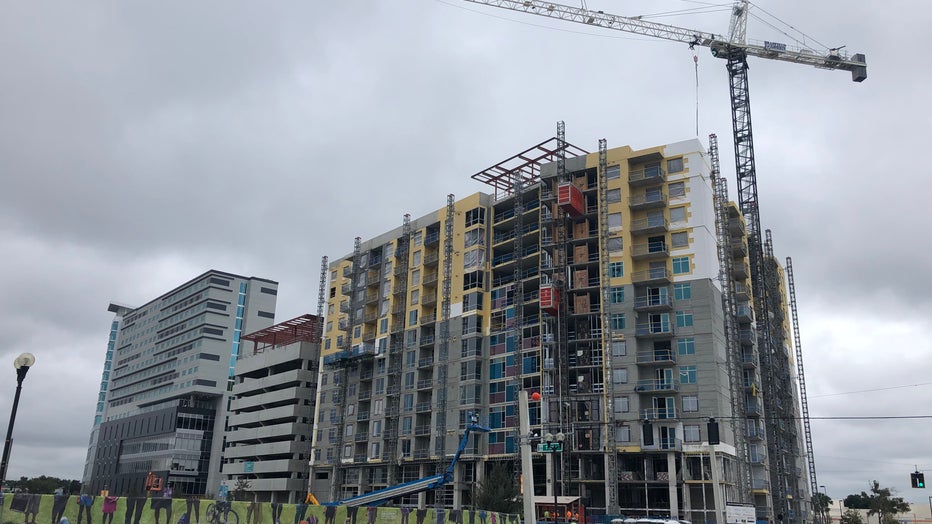 Construction underway at the Creative Village in the City of Orlando. (FOX 35 Orlando)

“To live there, to work there, to learn there, to be entertained there, it’s for all of us,” Chatmon said.

“I’d like to see that. It would be vibrant,” said Demond Gibson, Creative Village resident.

Gibson lives in the village and welcomes the plans.

“There needs to be more stuff down here, so I feel like bringing that down here will draw a lot more people,” Gibson said.

Students Giana and Danielle are excited to not have to walk into downtown for entertainment.

“It would be nice to have more food options,” said Danielle Gerholdt, Creative Village student.

“That’d be cool because there’s not much around here yet, not a lot of stores and food places are not that close to here,” said Giana Valentin, Creative Village student.

The build-out of the full Creative Village is projected to take about 10 years.