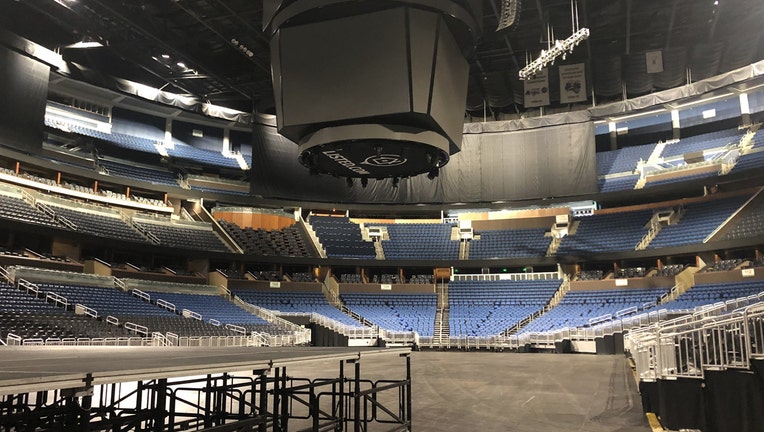 LAKE MARY, Fla. - The NBA is suspending the season after Wednesday night's games until further notice because of the coronavirus concerns.

Earlier Wednesday evening, the Oklahoma City Thunder's game against the Utah Jazz was postponed with the only explanation a public address announcement citing "unforeseen circumstances."  The starting lineups were announced, and it appeared the game was ready to start. Then, after a conversation among the officials, the teams went back to the locker rooms and the officials left the floor.

The Thunder mascot and their hype crew, the Storm Chasers, tried to keep a full house of fans entertained during the delay. The halftime entertainment was moved up. Finally, the announcement that the game was called off came about 35 minutes after the scheduled start time.  The NBA later announced that a player for the Jazz has preliminarily tested positive for COVID-19.

The NBA is suspending gameplay following the conclusion of Wednesday's schedule of games until further notice. The NBA will use this hiatus to determine the next steps for moving forward in regard to the coronavirus pandemic.

“As we’ve said from the beginning, the health and safety of our fans, employees, players, and partners is our top priority and thus we fully support the NBA’s decision to postpone games," said Orlando Magic CEO Alex Martins.  "We will continue to stay in contact with the league, and local, state and federal health experts as we closely monitor this public health crisis."

Martins also announced that tickets already purchased for a postponed game will be honored when the game is rescheduled. If games are not played or played in an empty-arena, fans will have the option to receive a credit for a future game or a refund. Fans can log on to OrlandoMagic.com where ticket and future schedule information will be announced.

During this period of increased focus on public health due to COVID-19, Martins asked that fans continue to practice healthy habits as outlined by the Centers for Disease Control.

MORE NEWS: Princess Cruises will stop all operations for 2 months due to the coronavirus

On Thursday morning, the Orlando Magic gave an update regarding coronavirus and the league's decision to suspend the season.

While the Orlando Magic flew on the same charter plane as the Utah Jazz, nobody from the team or traveling party is showing any COVID-19 symptoms. With that, nobody has been tested.

They said that they are awaiting further updates from the NBA regarding the rest of the season. They have several league conference calls set up for Thursday about how to proceed in the short and long term.

Meanwhile, the team said that they are not practicing and that they expect to care of its over 600 part-time employees.

"It is jarring because it’s bigger than basketball. We’re all waking up to a new reality and first and foremost we have to care about those closest around us,” the Orlando Magic President of Basketball Operations said.

The decision to suspend the season came down on Wednesday night.