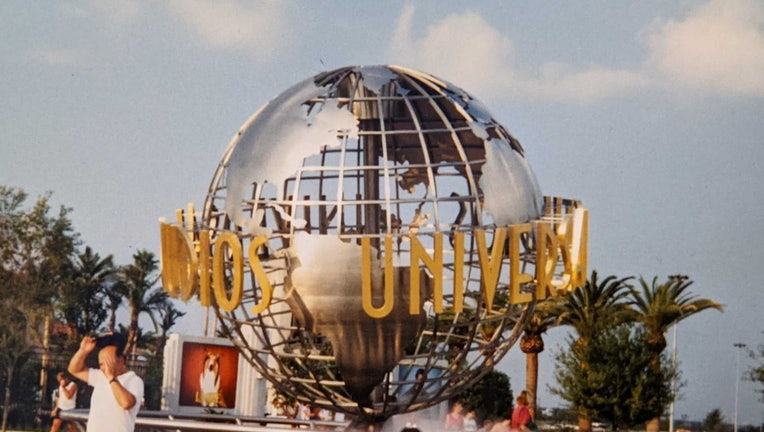 This photo was taken in October 1990. The original globe at Universal Orlando was moved to Universal Hollywood in California. It remains there to this day.

According to the History Center, the park opened after years of planning with a ribbon-cutting ceremony from Steven Spielberg. About 10,000 guests were said to have attended, including actors like Michael J. Fox and Sylvestre Stallone.

Ever since, the park has featured rides based on fan-favorite films. Starting with movies like ‘King Kong,’ ‘E.T.,’ and ‘Jaws,’ to now featuring blockbuster hits like ‘Harry Potter,' ‘Despicable Me,’ and ‘Jurassic World.’

One of the original rides is still open to this day: ‘E.T. Adventure.’ The attraction takes you on a bike ride with E.T. himself in the basket. You walk through a forest that smells of fresh pine before boarding a bike to bring E.T. home. Along the way, you encounter police, scientists, a beautiful skyline, and singing creatures. E.T. wishes you goodbye while saying your name on the way out.

Looking forward, Universal Orlando Resort is about to open its newest attraction, ‘Jurassic World: VelociCoaster,’ on June 10th at its second park, Islands of Adventure. The theme park company described the thrill ride as "a series of intense maneuvers that will send guests catapulting up to 70 mph and more than 150 feet in the air with the swiftest of prehistoric predators."

Inside the queue of Jurassic World: VelociCoaster

It's dubbed the apex predator of roller coasters more than two years in the making the Jurassic World VelociCoaster opens June 10 at Universal Orlando. FOX 35's David Martin chats with enthusiasts who have been on it already several times.