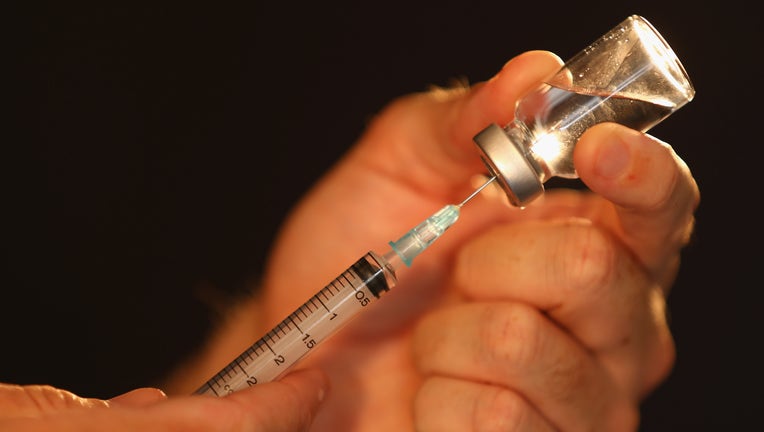 MELBOURNE, AUSTRALIA - FEBRUARY 21: Liquid is extraced from a medical vial with a syringe on February 21, 2013 in Melbourne, Australia. The Australian Crime Commission on Thursday released findings from a 12 month investigation into Australian sport, (Robert Cianflone/Getty Images)

Several residents and staff members at a group home for the developmentally disabled in Bartlesville, Okla., were hospitalized Wednesday evening after they were mistakenly injected with insulin, according to a local report.

"At some point, and we don't know how it happened yet, the vial that contained the flu vaccine was traded out for a vial containing what we believe to be insulin," Bartlesville Police Chief Tracy Roles told the news station.

The alleged mistake first came to light after one person at the home exhibited signs of hypoglycemia, also known as low blood sugar. Hypoglycemia can occur as a result of an insulin overdose.

“Excess insulin in the bloodstream causes cells in your body to absorb too much glucose (sugar) from your blood. It also causes the liver to release less glucose. These two effects together create dangerously low glucose levels in your blood,” explains Healthline.

Emergency officials were called to the home when the person showing signs of low blood sugar became unresponsive, according to the news station.

When first responders arrived, they noticed other people who had received the vaccine were also showing signs of low blood sugar. As a result of the mixup, two staff members and eight residents were taken to the Jane Phillips Medical Center and Hospital in Bartlesville.

All those affected were treated and are expected to be released.

"The person who administered what we believe is insulin is being very cooperative. Not being evasive or elusive at all,” Roles said. "So hopefully that means that this was just a terrible accident.”

The news comes after a similar incident occurred at an Indiana high school in October. At the time, 16 students were rushed to the hospital after they were mistakenly injected with insulin during a tuberculosis skin test at their high school.