FWC: Students gutted shark, froze before hanging it at school

The Florida Fish and Wildlife Conservation Commission is investigating after a dead shark was apparently gutted and hung in the courtyard of a Florida high school.

PONTE VEDRA BEACH, Fla. - The Florida Fish and Wildlife Conservation Commission is investigating after a dead shark was apparently gutted and hung in the courtyard of a Florida high school.

School staff took the shark down and disposed of its carcass before FWC was notified, he said. Photos have been sent to FWC's biologists to identify the species of the shark, he said.

Through its investigation, FWC said the shark was reportedly harvested on Tuesday, gutted, and stored in a freezer until it was hung at the school. The investigation is active and officials are conducting interviews, AuBuchon said. 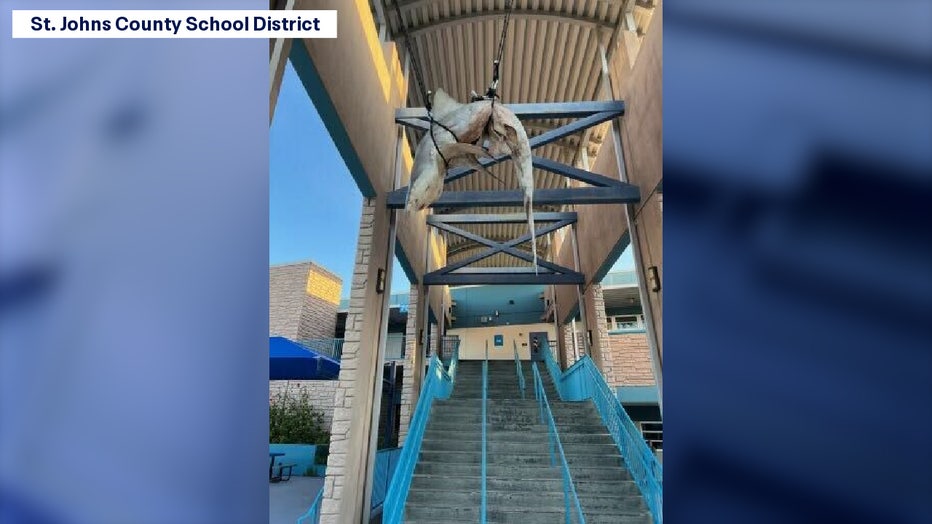 Ponte Vedra High School is part of the St. Johns County School District and is located in Ponte Vedra Beach, which is about 30 minutes southeast of Jacksonville.

"We are currently investigating this with the St. Johns County Sheriff’s Office. This is a serious matter and any students who are involved will be dealt with in accordance of a Level 4 offense in our student code of conduct," said Christina H. Upchurch, chief of community relations for the district, in a statement.

Level 4 offenses could include suspension, placement in an alternative school, or expulsion, as well as potential criminal charges, according to the district's Code of Conduct.