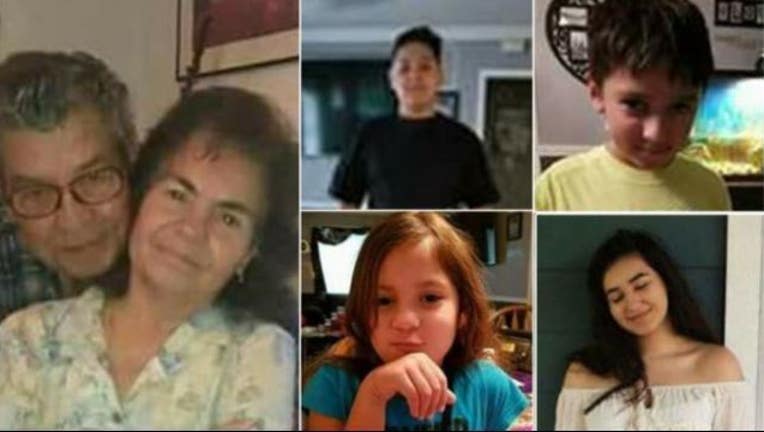 HOUSTON (AP) - Officers have located a submerged van in which six members of a Houston family were traveling when it was swept off a Houston bridge and into a storm-ravaged bayou.

Harris County Sheriff Ed Gonzalez says the van is in about 10 feet (3 meters) of muddy water in Green's Bayou in northeast Houston. He says the bodies of two adults can be seen in the front seat but that if the four children's bodies are inside they are obscured because of the water conditions and the angle of the vehicle.

Authorities are trying to decide whether dive team members will retrieve the bodies or if it would be safer to pull the van from the treacherous water first.

Virginia Saldivar told The Associated Press on Monday that when her in-laws' northeast Houston home began to flood early Sunday, her brother-in-law Samuel Saldivar borrowed her husband's van and drove to pick up the relatives. She said at some point on their way to safety, a strong current lifted the van and pitched it forward into Greens Bayou.

Samuel Saldivar climbed out of the driver-side window but the van's sliding door was partially submerged and would not open, Virginia Saldivar said. He yelled at the children to try to escape out the back, but they were unable. Virginia Saldivar said her brother-in-law could only watch as the van disappeared under water.

When two Harris County Sheriff's deputies found him clinging to a tree branch, water up to his neck, Samuel Saldivar was distraught and in tears, describing how he watched a van carrying his elderly parents and his brother's grandchildren sink into Greens Bayou, a relative said.

Saldivar's sister-in-law, Virginia, told The Associated Press Tuesday that the same deputies came to the suburban Houston home where she and her husband have stayed since volunteers evacuated them Monday for information about the children, aged 6 to 16, and her in-laws.

"They wanted to make sure that we understood how they found Sammy," she said.

After his parents' northeast Houston home began to flood early Sunday, Samuel Saldivar borrowed his brother's van and drove to pick up the relatives. He told deputies that while crossing a bridge, a strong current lifted the van and pitched it forward into a drainage channel.

Saldivar climbed out of the driver-side window but the van's sliding door was partially submerged and would not open, Virginia Saldivar said. He yelled at the children to try to escape out the back, but they were unable. Virginia Saldivar said her brother-in-law could only watch as the van disappeared underwater.

Saldivar believes her husband's parents, Manuel Saldivar, 84, and Belia Saldivar, 81, drowned along with her grandchildren: Daisy, Xavier, Dominic and Devy.

Virginia Saldivar said she lives in the same neighborhood as her relatives, but she and her husband left during a calm spell Saturday to watch the boxing match between Floyd Mayweather and Conor McGregor. The children's mother had left the four at home, she said. The widespread flooding prevented them from getting home until Sunday afternoon.

Virginia and her husband fled their home Monday evening when water rose to about 8 feet (2.44 meters) outside their front door. Volunteers helped get the couple to dry land.

Twice since Sunday, the children's mother went to the site where Samuel Saldivar told deputies the van disappeared, but the Coast Guard wouldn't let people through, Saldivar said. The children's father, her son, who she said is in prison for violating parole, first heard about the incident Tuesday. She told him during an allotted 10-minute phone call.