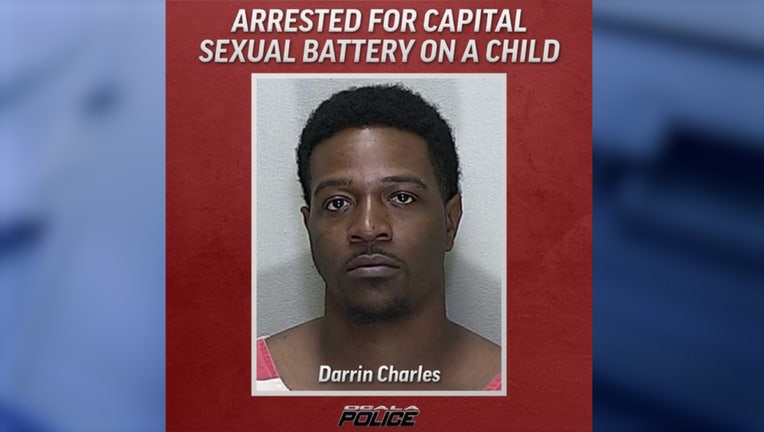 OCALA, Fla. - Police in Ocala arrested a man on Tuesday after officers say a 10-year-old accused him of sexual battery.

Darrin Charles, 33, faces a charge of capital sexual battery on a child, according to a Facebook post made by the Ocala Police Department.

Police say the charge stems from an incident the child says happened at least five years ago.

According to the police department, officers received a call on Feb. 8 from the boy's mother who said she just learned that her 10-year-old had been sexually battered by Charles when her son was five years old.

During an interview with the child at Kimberly's Center for Child Protection, the boy told officials that on the day of the incident, the child had to perform a sexual act on Charles in order to play a video game. The child said Charles then forced himself onto him, according to police, and threatened to kill him and his family if he told anyone about the incident.

Police said the boy recently told a family member about it, who then alerted his mother.

Officials say Charles denied the allegations and agreed to take a lie detector test, but canceled the appointment, saying he was invoking his fifth amendment right and was seeking a lawyer.

Officers encourage you or someone you may know that is a victim of a sexual crime to call police.