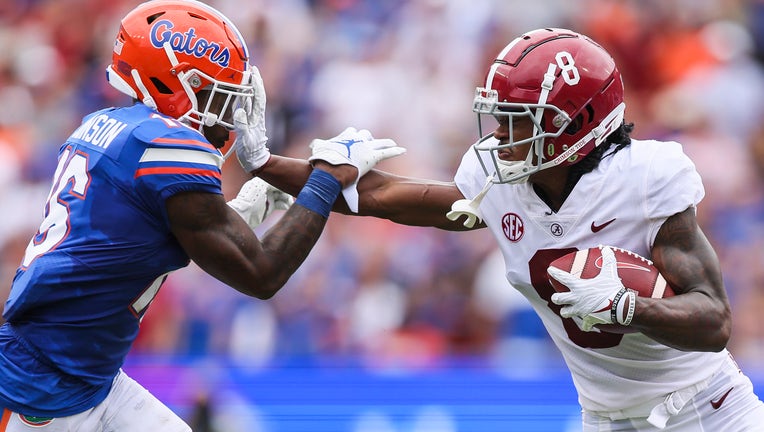 GAINESVILLE, FLORIDA - SEPTEMBER 18: John Metchie III #8 of the Alabama Crimson Tide runs for yardage against Tre'Vez Johnson #16 of the Florida Gators during the first quarter of a game at Ben Hill Griffin Stadium on September 18, 2021 in Gainesvill

GAINESVILLE, Fla. - Bryce Young’s first collegiate road start was a rousing success, a three-touchdown performance that helped top-ranked Alabama hold off No. 11 Florida 31-29 in the Southeastern Conference opener for both teams Saturday.

The defending national champion Crimson Tide (3-0, 1-0) stopped a 2-point conversion with 3:10 left and extended its winning streak to 17, making it 32 in a row against teams from the SEC’s Eastern Division.

The Gators (2-1, 0-1) have dropped eight straight in the series and fell to 0-5 against No. 1-ranked teams at Florida Field.

This one was closer than oddsmakers and just about everyone else expected, with 14 1/2-point underdog Florida having a chance to tie the game in the closing minutes despite playing without dynamic backup quarterback Anthony Richardson.

Coach Dan Mullen held Richardson out as a precaution because of a strained right hamstring and said he would only be available in case of an emergency.

That never became the case even though the Gators trailed 21-3 at the end of the first quarter. Young built the lead with TD passes to Jase McClellan, Jahleel Billingsley and Brian Johnson.

MORE NEWS: Tampa Bay Bucs to take on the Atlanta Falcons at home

The Gators rallied and were in position to tie late. Dameon Pierce capped a 75-yard drive with a 17-yard run that made it 31-29. But fellow running back Malik Davis failed to get the 3 yards needed on the 2-point conversion.